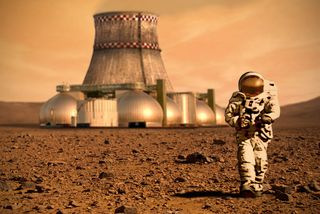 Six people recently returned from an eight-month long isolation experiment to test human endurance for long-term space missions. Their "journey to Mars" involved being isolated below the summit of the world's largest active volcano in Hawaii (Mauna Loa), and was designed to better understand the psychological impacts of manned missions.

NASA, which aims to send expeditions to Mars by the 2030s, is hoping that the results could help them pick crew members for a future mission to Mars. And it's not just NASA that has an eye on Mars. Maverick millionaire Elon Musk and aerospace firm Lockheed Martin have heralded separate missions and stations for the red planet between 2022 and 2028.

Indeed, scientific discovery is making a Martian Eldorado a feasible dream at breathtaking speed. Last month, China claimed to have developed a "physics-defying EmDrive," which would allow humans to journey to Mars in weeks. With or without this engine, it seems humans are on the inevitable trajectory to colonise Mars.

It is therefore becoming as important to ask what laws will govern humans on Mars as it is to ask whether we could survive on the planet's surface. Unexpectedly, this may be something that isolation experiments could help with.

Space law has always supported the position that objects and stations placed on celestial bodies are to remain under national ownership, jurisdiction and control. Private companies or other entrepreneurs cannot therefore have legitimacy or mine these bodies for resources unless they exercise lawful control through a sovereign state.

Current rules say the establishment of a space station and the area required for its operation should be notified to the Secretary-General of the United Nations. These would then be under the exclusive jurisdiction of the state where the spacecraft is registered or the state bringing the component parts of the station.

In many ways, this makes sense – it is difficult to see how a permanent station on Mars may be maintained without some form of tenure of the ground. The same goes for tenure over areas around the station sufficient for its maintenance (such as creating fuel from nearby resources). In fact, the closest practical analogies to a future Mars station in current jurisdictional terms would be the Antarctic stations maintained by Antarctic claimant states.

But there are areas where the law may need to be updated. With increased interest in multiple, permanent space stations on Mars and potentially dozens of objects in its orbit, the possibility of debris that could kill or damage Martian property also increases. What laws should govern this? It is in fact only a matter of time before damage to a space station caused by debris will lead to legal and political conflict?

It is also likely there will be questions regarding what states and corporations may be permitted to do on Martian colonies. Space manufacturing of drugs and other materials that may require absolutely sterile atmosphere could be carried out in space stations. Discoveries may under current laws be patented and commercialised. But the main question will be that of legitimacy of mining operations.

Although the use of resources for the conduct of scientific exploration and for the sustenance of a Martian mission is permitted under contemporary space law, creating property rights over space-based resources is not. That means the mining of resources for the purpose of commercial repatriation to Earth is forbidden until appropriate changes are made to space treaties.

However, the likelihood is that the law may end up being ignored – as shown by recent attempts to introduce appropriation of natural resources in space by the US and Luxembourg. Both countries have enacted domestic legislation essentially granting a blank cheque to private companies to embark on a winner-takes-all gold rush on celestial bodies.

When it comes to civil and criminal jurisdiction, there are tested examples – such as Intergovernmental Agreements of 1988 and 1999 which regulate the Columbus Space Station Project and the ISS. Partners to these agreements developed a code of conduct for space station crews in free space. The rules specified many things including the power to punish crimes, registration of space objects, safety of nationals and repatriation/scheduled return of offenders to Earth.

Criminal jurisdiction will continue to have to be strict and hierarchical. It is increasingly common that there are astronauts of different nationalities on board a spacecraft or space station, and they are often subordinate to the disciplinary authority of one commander. The commander in all likelihood will have been appointed by the state of registry of the spacecraft or space station. The authority of this person is typically absolute and unquestionable.

In many ways, a space station's commander inherits powers from older bodies of law such as that of a ship's captain. The connecting thread in all these traditions is the obvious need to ensure the safety and survival of crew and passengers and eventually "space colonists." Hopefully, recent isolation experiments could reveal a preference for a more democratic and less hierarchical regime for modern space stations.

This is not least because if collaborating countries all have their own commander, there could be conflict. A good indication would be how Russia and the US dealt with the transportation of Dennis Tito, an American millionaire, into orbit on Space Station Alpha as the first commercial space tourist. To win NASA's approval, the passenger, who ironically won the privilege to travel there on a Russian rocket, had to promise not to wander through American segments of the station without an escort. He also agreed to pay for anything he broke.

Ultimately, there's the possibility that colonists won't be happy being governed by Earth law. What should happen to them – would they be neo-colonialists or simply "alien" in legal terms? Would they or should they form or evolve their own juridical systems while in long-duration flight? Should parliaments on Earth deal with Martian earthlings' issues on an arms-length basis? These are all questions that need to be answered.

Luckily, psychological studies like NASA's will be very useful because the confined and stressful environments "astronauts" face may challenge current legal frameworks. The soup of legal issues that will emerge in future Martian space stations will be a curious thing indeed and things will certainly get sucher and sucher.