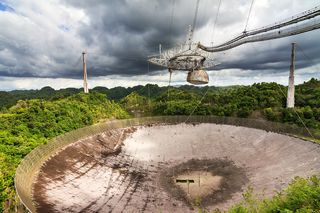 Nearly a week after Hurricane Maria pulverized Puerto Rico, staff members at the island's Arecibo Observatory are remaining optimistic as they continue to survey the damage to their enormous radio telescope.

The Arecibo Observatory contains the second-largest radio telescope in the world, and that telescope has been out of service ever since Hurricane Maria hit Puerto Rico on Sept. 20. Maria hit the island as a Category 4 hurricane, leaving behind a swath of downed trees, battered buildings and gushing rivers running through the streets.

Last week, officials reported that a 96-foot (29 meters) line-feed antenna that was suspended from a platform above the telescope's dish had broken off and punctured some of the mesh panels that make up the 1,000-foot (305 m) dish below.

A smaller, secondary dish located nearby on the premises was reported "lost" on Friday (Sept. 22) by officials with the Universities Space Research Association (USRA), which helps to run the observatory.

However, officials are now saying that the damage to this secondary dish wasn't quite as serious as they thought. "There was some damage to it, but not a lot," Nicholas White, a senior vice president with USRA, told NPR. "So far, the only damage that's confirmed is that one of the line feeds on the antenna for one of the radar systems was lost," he added.

Along with the aforementioned Facebook post, Córdova shared a photo of two Arecibo employees standing in front of the damaged telescope dish and holding up the flag of Puerto Rico. "Still standing after Hurricane Maria!" Córdova wrote in the post.

Despite Córdova's optimistic message, staff members and other residents of Puerto Rico are in a pretty bad situation. Power has yet to be restored to the island since the storm hit, and people are running out of fuel for generators. And with roads still blocked by fallen trees and debris, transporting supplies to people in need is no simple task.

National Geographic's Nadia Drake, who has been in contact with the observatory and has provided extensive updates via Twitter, reported that "some staff who have lost homes in town are moving on-site" to the facility, which weathered the storm pretty well overall. Drake also reported that the observatory "will likely be serving as a FEMA emergency center," helping out members of the community who lost their homes in the storm.