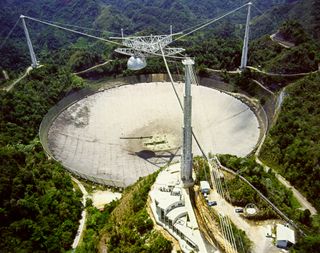 Arecibo Observatory, which is in Puerto Rico, is the location of the world's second-largest single-dish radio telescope. Because radio telescopes can work at all times of day and in all kinds of weather, the observatory operates 24 hours a day.

While the observatory does a lot of astronomy work, it is perhaps most famous for being the site of the huge Search for Extra Terrestrial Intelligence (SETI) message directed at the globular cluster M13 in 1974.

Besides its scientific work, Arecibo is known for being the location of a climactic fight in "Goldeneye," a 1995 James Bond film starring Pierce Brosnan.

The telescope is part of the National Astronomy and Ionosphere Center. The National Science Foundation has a co-operative agreement with the three entities that operate it: SRI International, the Universities Space Research Association and Puerto Rico's Metropolitan University (UMET).

In February 2018, the National Science Foundation — which has provided most of the observatory's funding since the 1970s — announced that it will cut its annual contribution from $8 million to $2 million by FY2023. In April 2018, the University of Central Florida in Orlando took over management and operations of the observatory.

Five decades ago, scientists sought a radio telescope that was close to the equator, according to Arecibo's website. This location would allow the telescope to track planets passing overhead, while also probing the nature of the ionosphere — the layer of the atmosphere in which charged particles produce the northern lights.

Cornell University's William Gordon, who pursued atmospheric studies, was one of the main forces behind Arecibo's construction, and its first director. The telescope was built in an area of limestone sinkholes that "provided a natural geometry."

The reflective dish is 1,000 feet (305 meters) in diameter, 167 feet (51 m) deep, and covers an area of about 20 acres (81,000 square meters). A triangular platform is suspended 450 feet (137 m) above the dish by three concrete towers. The platform holds the azimuth arm, a dome containing two subreflectors, and a set of antennae that can be tuned to a narrow band of frequencies.

Arecibo was the largest radio telescope until July 2016, when China finished the Five-hundred-meter Aperture Spherical Telescope's (FAST) giant dish. That dish — the size of 30 football fields — is 1,650 feet (503 m) wide.

On Sept. 20, 2017, Hurricane Maria ravaged the island of Puerto Rico, damaging the Arecibo Observatory. The Category 4 storm killed hundreds of people and caused widespread power outages that lasted for months. Power to the observatory was restored on Dec. 9, 2017.

The most significant damage was to the 96-foot (29 meters) "line feed" antenna, which was suspended above the radio dish. It broke off during the hurricane and punctured the dish below when it fell. A federal spending bill passed in February 2018 to provide relief to Puerto Rico allocated $16.3 million to repairing the Arecibo Observatory.

"Emergency repairs that needed immediate attention, such as patching roofs and repairing electrical feeds, have been underway since May after the site received hurricane-relief funding," the University of Central Florida said in a statement issued in August 2018. "Additional repairs that will require more time and expertise will be completed as soon as possible."

Arecibo broadcast a pictorial message into space in 1974, aiming for M13 — a globular cluster of stars. It will take some time for the message to get there, as M13 is about 21,000 light-years away.

According to SETI, the broadcast is roughly the same as a 20-trillion-watt omnidirectional broadcast. In simple terms, the broadcast would be visible by just about any receiver in the galaxy that is about the same size as the antenna at Arecibo.

"We translated the radio-frequency message into a warbling audio tone that was broadcast over speakers at the ceremony. When [the tone] started, much of the audience spontaneously got up and walked out of the tent and gazed up at the telescope," recalled past Arecibo director Harold Craft in a 1999 Cornell University press release marking the 25th anniversary.

In the decades following, SETI has trumpeted the message as a significant step to helping understand the challenges of communicating with aliens. "Although it's unlikely that this short inquiry will ever prompt a reply, the experiment was useful in getting us to think a bit about the difficulties of communicating across space, time, and a presumably wide culture gap," SETI wrote on its website.

These days, Arecibo is frequently used for finding asteroids that are swinging close to Earth. The observatory focuses on those that could pose a danger to the planet, making an effort to accurately measure their sizes to gauge the potential impact it could have.

In 2013, for example, the observatory watched the arrival of asteroid 2012 DA14, which passed within 17,200 miles (27,000 kilometers) of Earth. It was a close flyby, but NASA emphasized the asteroid passed by at a safe distance.

Besides asteroid research, Arecibo is also the site of the Planetary Habitability Laboratory at the University of Puerto Rico at Arecibo. The group has a habitable planets catalog that tracks the number of alien worlds in other solar systems that could be in the Goldilocks zone, or area that is not too hot or cold for life, of their respective stars.