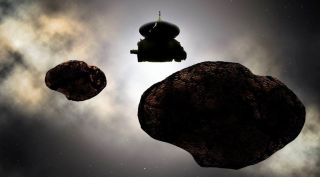 New observations suggest that 2014 MU69, the Kuiper Belt object that New Horizons will fly past in 2019, may be a binary object.
(Image: © NASA/JHUAPL/SwRI)

WASHINGTON — While still more than a year away from a flyby of a distant object in the solar system's Kuiper Belt, the team running NASA's New Horizons mission is already looking ahead to future extended missions that could include another flyby.

In a Sept. 6 presentation to the Outer Planets Assessment Group (OPAG) in La Jolla, California, Alan Stern, principal investigator on the New Horizons mission, said there was a "fighting chance" the spacecraft would be able to fly past another object in the Kuiper Belt.

New Horizons, which completed its primary mission with the July 2015 flyby of the dwarf planet Pluto, is currently on an extended mission that will take the spacecraft past a small Kuiper Belt object known as 2014 MU69 on New Year's Day 2019. That flyby is part of an extended mission, lasting until 2021, that NASA approved in 2016 as part of the most recent senior review of planetary science missions.[Destination Pluto: NASA's New Horizons Mission in Pictures]

Little is known so far about 2014 MU69, discovered in Hubble Space Telescope observations as part of an effort to identify a Kuiper Belt object close enough to New Horizons' post-Pluto trajectory to enable a flyby. Scientists though the object was a small body no more than about 50 kilometers across. "About the only physical measurements we had of it until recently were its magnitude and its color," Stern said at the OPAG meeting.

More recent observations by Hubble showed little evidence of variations in brightness as the body rotated. "It either means that the object is not presenting vastly different cross-sections to us as it rotates, or we're looking down the barrel of the rotation axis," he said.

Because of that, New Horizons may not need fuel being reserved to adjust the spacecraft's trajectory for the flyby. "It doesn't matter where in the rotation phase we show up," he said. "We're going to see about the same amount of terrain."

That fuel, Stern suggested, could instead be used to redirect New Horizons after the 2014 MU69 flyby to another, even more distant Kuiper Belt object yet to be identified. "We are currently searching for new close flyby targets, and we have some very promising techniques" for doing so, he said. "We have a fighting chance of having a second [Kuiper Belt object] flyby."

That search, though, is secondary to planning for the 2014 MU69 flyby. The flyby campaign, he said, will start in August 2018 and continue through the first week of January 2019, after which the spacecraft will spend the next 20 months transmitting the data collected during the flyby back to Earth.

Observations performed this summer suggest that 2014 MU69 may be a more complex object than originally expected. An occultation of a distant star by the object, witnessed in July by teams of astronomers operating portable telescopes in the Patagonia region of Argentina, gave scientists their first estimate of the shape of the object.

"What we expected, of course, was just an ellipsoid," Stern said. "What we got looks like either a double-lobed object or two objects — a binary — orbiting one another that just happen to be overlapping at the time of this event. Either way, it's exciting."

In addition to the 2014 MU69 flyby, New Horizons is making more distant observations of dozens of other Kuiper Belt objects as well as Centaurs, another class of small bodies in the outer solar system that orbit closer to the sun. The spacecraft is also performing heliophysical observations.

Such observations could continue in future extended missions beyond 2021, regardless of plans for another close Kuiper Belt object flyby. "There's still a lot of good planetary science to be done with New Horizons," he said. "We expect to put a second extended mission proposal in for senior review around that time."

"I think New Horizons has a bright future continuing to do planetary science and other applications," he said. "There's fuel and power on board the spacecraft to operate it for another 20 years. That's not going to be a concern even for a third or fourth extended mission."