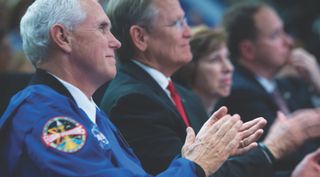 SAN FRANCISCO — The Trump administration has identified representatives of the various government agencies who will serve on the National Space Council, which is likely to hold its first meeting "very, very shortly," Greg Autry, the administration's former NASA liaison, said Aug. 30.

The National Space Council led by U.S. Vice President Mike Pence and Executive Director Scott Pace will focus on defense and economic policy rather than science and exploration, Autry said at the Space Technology and Investment Forum here.

The administration will use the National Space Council to offer a cohesive U.S. government strategy and prevent NASA, the Defense Department, the National Reconnaissance Office and Congress from moving in different directions. "We all want to achieve a viable space economy and that's where we should all be moving," Autry said. [In Photos: President Trump's Administration and NASA]

Autry, an assistant professor of entrepreneurship at the University of Southern California, is not currently serving in the Trump administration or NASA. He offered his observations and opinions as a former member of Trump's NASA transition team and former NASA liaison.

Although some people have expressed concern that the National Space Council could become a bottleneck and "things can't get approved until they go through a contentious space council," that is unlikely to happen, Autry said. With Pence and Pace at the helm, "I feel confident that this will be a decisive body that will get things done."

The president and vice president are personally enthusiastic about space, Autry said, adding that Pence is particularly eager to support public-private partnerships.

"He wants to see the private sector and private investment co-invested with government money to create solutions that create long-term, sustainable economic activity not just funding another government project," Autry said. [From Ike to Trump: Presidential Visions for Space Exploration]

In terms of space exploration, the White House is likely to make "bold, aggressive moves" and to emphasize a return to the moon through a commercial program, Autry said. For example, the administration is likely to support a moon initiative that includes big and small landers, he said.

In addition, the White House will work with Congress to increase the budgets for the U.S. Commerce Department's Office of Space Commerce and the Federal Aviation Administration's Office of Commercial Space Transportation, two agencies Autry called "terribly underfunded."