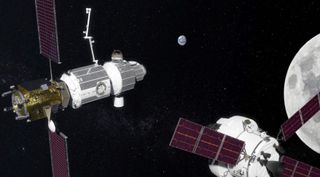 An illustration of NASA's proposed Deep Space Gateway in orbit around the moon. A NASA request for information seeks ideas from industry on how to develop the gateway's power and propulsion module.
(Image: © NASA)

WASHINGTON — NASA is taking the next small step in the development of a proposed Deep Space Gateway in cislunar space by requesting information about one of its core modules.

A request for information (RFI), released by NASA July 17, seeks information from industry regarding their capabilities to build a Power and Propulsion Element (PPE), a module that will produce electrical power and provide chemical and electrical propulsion for the gateway.

As currently envisioned by NASA, the PPE would be the first element of the gateway, launched as a "co-manifested payload" on the first crewed Space Launch System launch, taking advantage of the additional payload capacity provided by the Block 1B version of the SLS. The PPE would go into what is known as a near rectilinear halo orbit around the moon within 100 days of launch.

The RFI describes the basic capabilities and requirements of the PPE as envisioned by NASA. The module would have a 15-year lifetime and be equipped with a solar electric propulsion system that uses xenon propellant, as well as chemical thrusters that use hydrazine. The module would weigh no more than 7,500 kilograms in order to be a co-manifested SLS payload, including a tank carrying 2,000 kilograms of xenon.

The PPE will produce electrical power, being able to transfer up to 24 kilowatts to other modules later added to the gateway. It will also support communications in several bands, as well as an optical communications demonstration payload.

In the RFI, NASA asks potential respondents their ability to produce the PPE, including a "conceptual schedule, rough order of magnitude engineering cost estimate, and recommended contract vehicle" for it. NASA expects to have the PPE delivered to the Kennedy Space Center for integration onto the SLS in December 2021, which would support a launch of the Exploration Mission 2 flight now expected for some time in 2022.

NASA hopes that the module can build on early design work for the Asteroid Redirect Mission, whose robotic spacecraft would have also used solar electric propulsion to travel to and from a near Earth asteroid. "Identify a conceptual design you would use as a starting point and what changes you believe are warranted to address PPE capability statements," NASA instructs industry in the RFI.

NASA also asks industry to address several other issues in the RFI. These range from the potential use of green propulsion alternatives for the hydrazine thrusters on the spacecraft and the use of a commercial spacecraft bus for the module to discussion of potential cost-sharing approaches for its development.

"Through the RFI, we hope to better understand industry's current state-of-the-art and potential future capabilities for deep space power and propulsion," said Michele Gates, director of the PPE effort at NASA Headquarters, in an agency statement. Gates formerly was director of the Asteroid Redirect Mission program.

The agency is moving quickly with the RFI. Released July 17, NASA seeks responses by the end of the day July 28. The agency will conduct a question-and-answer session online about the RFI July 24.

In addition to the RFI, NASA plans to release a broad area announcement in August, under its existing Next Space Technologies for Exploration Partnerships (NextSTEP) program, related to development of the PPE. That announcement will seek proposals for short-term studies to address technical issues involving the PPE, including its power and propulsion systems as well as other key subsystems.

The RFI and planned NextSTEP studies are NASA's next tentative steps in the development of the Deep Space Gateway concept. NASA describes the gateway as "a lunar-orbiting, crew-tended spaceport" that would also include a habitation module and docking ports for the Orion crew spacecraft and separate cargo spacecraft. The gateway's additional modules would also be delivered to cislunar space as co-manifested payloads on future SLS launches.

Crews would visit the gateway on Orion missions, spending up to several weeks there before returning. The PPE would allow the gateway to change orbits, including moving closer to the moon to support any potential later missions on the lunar surface.

NASA also foresees using the gateway to support the Deep Space Transport, a future spacecraft that would carry crews into deep space in preparation for Mars missions NASA seeks to fly in the 2030s.

The gateway and the transport, though, are currently only concepts and not formal NASA programs. The gateway remains under study, and NASA did not request funding for it as a standalone program as part of its fiscal year 2018 budget request.