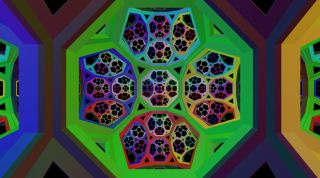 The researchers built a VR landscape that followed the rules of hyperbolic geometry. Here, a screengrab of one of these non-Euclidean worlds in the research group's simulations.
(Image: © eleVR/Hypernom)

Virtual reality can take you to some far-out places — mountaintops, distant cities and even fantastical game worlds. A team of artists and mathematicians is now adding to that list: universes where the usual rules of geometry and physics don't apply.

Vi Hart, who founded the research group eleVR, led a team that built a virtual landscape that looks like a set of endlessly repeating chambers. This virtual landscape follows the rules of a type of non-Euclidean geometry called hyperbolic geometry (also called H-space). It operates in a different way than the normal world, which abides by so-called Euclidean geometry. In this VR universe, the floor can fall away from your feet as you walk forward and distances aren't what they seem, all because lines and angles don't behave the way they do in the ordinary world.

"In H-space, when you move your head a little bit it's normal, but if you make larger movements it's different," Henry Segerman, a co-author of the studies and an assistant professor of mathematics at Oklahoma State University, told Live Science. That's because in H-space "a lot of it is very close to you," meaning that the amount of space between two points is less in certain directions than in Euclidean space, where a unit of distance is a consistent length. [5 Reasons We May Live in a Multiverse]

The results have applications in the academic realm as well as for the video-game industry. However, the impetus for the project was more art than science: "Mathematics and art are not so distant from each other," Hart said. "In both mathematics and art, we can talk about entirely fictional worlds."

Most geometry used in everyday life is the geometry of flat spaces, or Euclidean geometry, so called because the Greek mathematician Euclid wrote down many of its principles. For example, Earthlings expect that parallel lines will never meet and that if you add up the internal angles of a triangle it will come out to 180 degrees. It also means that if you walk forward 10 feet, make a right, walk the same distance, and repeat the process three more times you'll come back to the same point.

Non-Euclidean geometry doesn't operate that way. A triangle inscribed on the surface of a sphere — a spherical geometric space — has more than 180 degrees in its internal angles, and one drawn on a saddle-shaped surface — a hyperbolic geometrical space — can have fewer degrees. Spherical geometry gets used in navigation because the surface of the Earth is spherical. Hyperbolic geometries show up more in cosmology.

"A hyperbolic space is shaped rather like a Pringles chip," Segerman said.

The upshot is that exploring non-Euclidean worlds via virtual reality will be deeply weird. In order for the scientists to translate this weird realm to a VR space, they had to include at least a few Euclidean features, if only to make it less disorienting to users, Segerman said. [The 11 Most Beautiful Mathematical Equations]

The project isn't designed to have any immediate use. The resulting VR landscape could make for fun video-game worlds and even be used to teach students how to navigate in such spaces. In addition, some types of data with a lot of "branching trees" ― which are typically tricky to visualize ― could be visualized in these kinds of spaces.

It's could also be useful in mathematics. "Sometimes entering this [world] is a more direct thing than reading about it or calculating," Segerman said. Walking through a non-Euclidean space in person is easier for many people than trying to analyze it on paper, since one interacts via the senses just as one does in the ordinary world.

Another researcher he cites in the paper, Jeff Weeks, has made flight simulators, for example, that work in these kinds of spaces.

"The 'real reason' (in my opinion, at least) is to let people get a gut-level understanding of various non-Euclidean geometries. In other words, rather than trying to understand non-Euclidean geometries via formulas and abstract mathematical models, we want people to experience them directly," Weeks, an independent researcher who has designed games to explore mathematical concepts, told Live Science in an email.

Teaching people how to navigate such odd spaces can have real-world benefits in physical science as well. The whole universe, for example, is actually a non-Euclidean space, on large cosmological scales.

"The conclusion here is that if we want to understand the natural world we live in, we need to let go of Euclidean preconceptions, and get comfortable with several other kinds of geometry."

The research is detailed in two papers published on the preprint site arXiv.org.