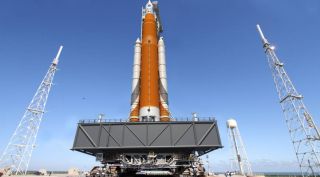 A new study will examine placing a crew on the first SLS/Orion mission, EM-1, which currently is set to fly in late 2018 without astronauts on board.
(Image: © NASA)

WASHINGTON — NASA plans to study putting astronauts on the first launch of its Space Launch System heavy-lift rocket, a move that could introduce new delays and other complications into the vehicle’s development.

NASA Acting Administrator Robert Lightfoot, in a speech at the Space Launch System/Orion Suppliers Conference here Feb. 15, and a memo emailed at the same time to the agency’s workforce, said he had directed Bill Gerstenmaier, NASA associate administrator for human exploration and operations, to begin a study on the feasibility of putting a crew on the first SLS mission, known as Exploration Mission 1 (EM-1).

"The study will examine the opportunities it could present to accelerate the effort of the first crewed flight and what it would take to accomplish that first step of pushing humans farther into space," NASA spokesman Bob Jacobs said in a statement to SpaceNews confirming the planned study. [Photos: NASA's Space Launch System for Deep Space Flights]

Current plans call for the EM-1 mission to launch in late 2018 without a crew. The first crewed flight would be EM-2, which NASA is planning to launch in 2021. However, an assessment in 2015 performed as Orion reached a development milestone known as Key Decision Point C indicated that there was a 70 percent chance the EM-2 mission would launch no later than April 2023.

Lightfoot, in the memo, said the study will examine the technical and schedule issues of flying a crew on EM-1. "I know the challenges associated with such a proposition, like reviewing the technical feasibility, additional resources needed," he wrote, "and clearly the extra work would require a different launch date."

Lightfoot didn’t discuss the specific challenges, but they are likely to involve both issues with the Orion spacecraft and SLS vehicle. NASA did not plan to have a full life support system in the Orion spacecraft for the EM-1 mission as it would not have a crew on board. Last year, the agency said it was considering shortening the EM-2 mission since it would be the first Orion flight with the complete life support system.

The SLS that will be used on EM-1 will use an upper stage derived from the Delta 4, known as the Interim Cryogenic Propulsion Stage (ICPS). NASA plans to replace it on EM-2 and future SLS missions with the more powerful Exploration Upper Stage (EUS), which would be human-rated for crewed missions.

NASA stopped work on human-rating the ICPS a year ago, following direction from Congress in the report accompanying the fiscal year 2016 appropriations bill. Congress has pushed NASA to accelerate work on the EUS, allocating additional funding for it, so that it would be ready for EM-2. NASA announced in January that EUS had passed its preliminary design review, keeping the stage on track for launch in 2021 on the EM-2 mission.

That work, as Lightfoot suggested in his memo, would likely delay the EM-1 launch from its current estimated launch window of September to November 2018. Industry sources said they believe addressing the various issues would delay the mission to 2019 or 2020. That would still be sooner than current NASA schedules for EM-2.

Lightfoot, in the memo, also addressed broader concerns about NASA’s future direction. "From my interactions with the transition team, NASA is clearly a priority for the President and his administration," he wrote, adding that when he received information from the administration about its plans for the agency, he would share it with employees.

"There has been a lot of speculation in the public discourse about NASA being pulled in two directions – what has come before and what we want to do now. At NASA, this is an ‘and’ proposition, not an ‘or,’" he added near the end of the memo. "We must work with everyone to secure our leadership in space – and we will."