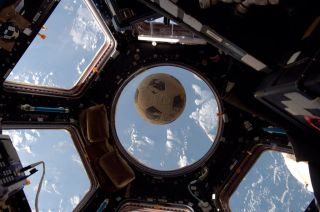 A soccer ball flown aboard the ill-fated launch of the space shuttle Challenger floats on the International Space Station.
(Image: © NASA)

HOUSTON — A soccer ball that was on the ill-fated launch of the space shuttle Challenger has made it to orbit 30 years later, thanks to a shared connection between one of the fallen astronauts and the current commander on the International Space Station.

NASA astronaut Shane Kimbrough, the commander of the station's Expedition 50 crew, posted to Twitter Friday (Feb. 3) a photo of the black and white ball floating in front of the windows in the orbiting laboratory's Cupola. His post came less than a week after the anniversary of the Jan. 28, 1986 Challenger tragedy.

Like Onizuka, Kimbrough is a "Falcon dad" — his son is currently a junior at the high school and is a member of its Falcon sport teams. (Kimbrough also has twin daughters in their first semesters at college.)

"Space station commander Col. Shane Kimbrough took a piece of CLHS Falcon history into space," the high school announced on its website. "The soccer ball was signed by members of the CLHS girls and boys soccer team in 1986 and was carried onboard the last flight of the space shuttle Challenger by another Falcon dad — Col. Ellison Onizuka."

Onizuka's daughter, Janelle, was a 16-year-old member of the soccer team at the time and is now a "Falcon mom."

"The soccer ball in many ways has continued the mission my father embarked upon so many years ago," remarked Onizuka-Gillian in the statement released by CLHS. "It has continued to travel and explore space, while inspiring so many through its history."

Ellison Onizuka was making his second flight as a mission specialist when Challenger was lost 73 seconds into flight. Cold weather compromised a seal on one of the twin solid rocket boosters. Gas burning through the wall of the right booster damaged its connection to the vehicle, causing the structural failure of the external tank.

Challenger broke apart, giving way to aerodynamic forces, and fell in pieces into the ocean.

Several of Onizuka's personal items, including a football, an American flag and the soccer ball were found floating in the water during the retrieval of the wreckage of the space shuttle.

After NASA's investigation into the accident was complete, Challenger's debris was placed into storage in two retired missile silos at the Cape Canaveral Air Force Station. The crew's personal items were presented to their families.

"Thank you Shane Kimbrough for helping a piece of CLHS Falcon history complete its mission in space!" the school tweeted on Friday.