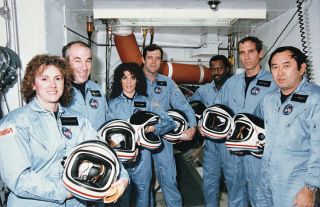 NASA will honor the memories of its fallen astronauts during a series of special ceremonies Thursday (Jan. 28), the 30th anniversary of the Challenger space shuttle tragedy.

The agency will pay tribute to Challenger's seven-member crew, as well as the three astronauts lost in 1967's Apollo 1 fire and the seven space flyers who died when the shuttle Columbia broke apart in 2003. Ceremonies will occur during NASA's annual Day of Remembrance, on Thursday.

Other NASA centers, including Marshall Space Flight Center in Alabama, Johnson Space Center in Houston and Glenn Research Center in Ohio, will host their own events to mark the somber occasion.

The three NASA tragedies occurred just a few days apart on the calendar, over the span of 36 years. The Apollo 1 fire broke out in the command module of Gus Grissom, Ed White and Roger Chaffee on Jan. 27, 1967, while the three astronauts were participating in a launch pad test at Cape Kennedy (now known as Cape Canaveral) Air Force Station in Florida. All three men were killed.

An investigation later determined that Challenger was doomed by a failure in an "O-ring" seal on the shuttle's right-hand solid rocket booster. Cold weather played a role in the failure, by hardening the usually flexible O-ring.

Columbia was lost toward the very end of its mission, breaking apart upon re-entry to Earth's atmosphere on Feb. 1, 2003. A piece of insulating foam had broken off Columbia's huge external fuel tank during the shuttle's launch two weeks earlier, and investigators later determined that the chunk damaged the orbiter's left wing, allowing hot atmospheric gases to enter the wing's interior.