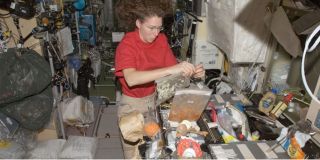 Former astronaut Sandy Magnus tries her hand at space cooking during her 134-day mission aboard the space station in 2008-2009.
(Image: © NASA)

NASA scientists are working on technologies to extend the shelf life of foods to up to seven years. That's more about triple the amount of time foods currently flown aboard the International Space Station are considered useable, said Kloeris, manager of NASA's Space Food Systems Laboratory at the Johnson Space Center in Texas.

Which is not to say that foods, including the holiday dinner NASA astronauts Shane Kimbrough and Peggy Whitson be sharing with their crewmates aboard the space station on Thursday, are unsafe to eat after two years, just that they might not be as tasty or provide as much nutrition, Kloeris said in an interview with Seeker.

Taste and nutrition are among the key challenges scientists face as they work to develop foods that will keep astronauts happy, healthy and productive during a three-year mission to Mars.

Because food will be among the cargo flown to Mars before any people arrive, NASA figures it needs to have a shelf life of between five and seven years. Astronauts would eat the oldest foods during the six- to nine-month journey back to Earth.

Seven-year-old turkey may not sound very appetizing, but NASA, in partnership with military researchers, is looking at two promising technologies that could make it a reality.

The first method, called high-pressure processing, is similar to how canned foods are prepared today, but with less heat and more pressure.

Because it started off better quality, the food would take longer to degrade, giving it a longer shelf life, she said.

The high-pressure process already is in use today for some refrigerated products, like guacamole in a pouch, which, if prepared the way canned foods are processed, would be black instead of green.

The second method is called microwave sterilization, and it works by quickly heating and quickly cooling foods. Because the heat is applied over a shorter period of time, theoretically, it should start off higher quality and remain edible longer.

NASA also is mulling how much variety in foods is needed to maintain a crew's physical, psychological and emotional health.

"Food is important on lots of levels," former astronaut Sandy Magnus told Seeker. "Human beings gather around food for social purposes. Think of all the times you meet friends at restaurants or bars and share a meal and get caught up over food.

"When you have a party at your house, how often does the group tend to gather in the kitchen? From a social viewpoint, having the ability to gather for the preparation of meals, the sharing of the meal, and the clean up is important socially and psychologically," she said.

Dining logistics may be different in space, but the idea is the same, said Magnus, who experimented with cooking while she served aboard the station.

RELATED: Here's How Extraterrestrial Farming Will Work on Mars

Among the 200 or so different items in the station's pantry are the fixings for a traditional Thanksgiving dinner, including sliced turkey, cornbread dressing, green beans and mushrooms and various desserts.

"What the astronauts eat is really up to them," Kloeris said.

One thing the astronauts have that's not available to terrestrial diners is a ringside seat to see Earth from space.

"Holiday or not, getting the view… makes you appreciate the beauty and wonder of the planet that we live on," Magnus wrote in an email. "If we could somehow have everyone take a moment at holidays to try and capture that same sentiment somehow — maybe being outside and watching the beauty of a deep blue sky, listening to the wind blow through a stand of trees, smell the rain coming in a storm — then I think there would be less negativity in the world. We sometimes don't stop to see and appreciate the beautiful things around us."