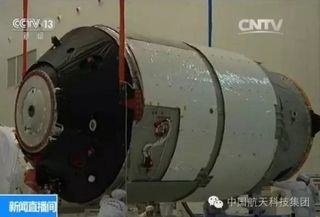 It's an important year for China's burgeoning human spaceflight program.

Chinese news agencies report that the country's second orbiting space lab — Tiangong-2 — was delivered over the weekend by rail from Beijing to the Jiuquan Satellite Launch Center, about 1,000 miles (1,600 kilometers) away in the Gobi Desert.

According to a statement from China's manned space engineering office, the vessel will undergo assembling and testing processes at the center in preparation for its mid-September launch.

Tiangong-2 will be China's second orbiting space lab, and it will eventually be visited by two astronauts onboard the Shenzhou-11 spacecraft. (China's first space lab, Tiangong-1, launched in September 2011 and hosted crewed dockings in June 2012 and June 2013. Tiangong-1's operational life is now over, and the space lab is expected to fall back to Earth relatively soon.)

Check out these two videos, which show how technicians and engineers are getting Tiangong-2 and its Long March 2 F rocket ready for the upcoming launch:

Early next year, a Long March 7 rocket will loft a Tianzhou supply ship to the Tiangong-2 space lab.

Also on tap this year is the maiden blastoff of China's Long March 5 rocket. This booster is eventually scheduled to launch space station modules into Earth orbit, help get moon samples to Earth and blast a rover toward Mars in 2020, Chinese officials have said.

Prior to the capsule's landing, the re-entry module spent about 20 hours in orbit.

Leonard David is the author of "Mars: Our Future on the Red Planet," to be published by National Geographic this October. The book is a companion to the National Geographic Channel six-part series coming in November. A longtime writer for Space.com, David has been reporting on the space industry for more than five decades. Follow us @Spacedotcom, Facebook or Google+. Published on Space.com.