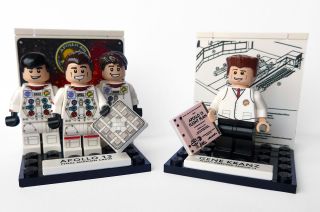 Minifigs.me has launched Apollo 13 custom LEGO minifigures in time for the 45th anniversary of the historic mission.
(Image: © Minifigs.me via collectSPACE.com)

Launched just in time for the start of the historic mission's 45th anniversary this weekend, UK-based Minifigs.me on Friday (April 10) introduced a set of four new customized minifigures replicating the Apollo 13 crew and their "failure is not an option" flight director.

The 2-inch-tall (5 centimeters) toy figures are modeled after the real James Lovell, Fred Haise, Jack Swigert and Gene Kranz (rather than their movie likenesses: Tom Hanks, Bill Paxton, Kevin Bacon and Ed Harris). And although small, they are fully detailed. [Facts about NASA's Apollo 13 Mission]

"We've ended up with some pretty accurate minifigures," Nick Savage, Minifigs.me co-director, wrote in an email to collectSPACE. "We have discussed everything from the precise placement of the metal tabs on each valve to the minute and major differences between each spacesuit."

Savage worked with Apollo enthusiast and collector Chris Spain, whose websites detail the history of the astronauts' mission patches, portraits and space-flown artifacts.

"Basically they followed my ideas for the Apollo spacesuit and Kranz graphics very closely but added some LEGO-y touches that make them work better on the minifigs," said Spain. "It's been a long, interactive process, but the guys there are keen space fans and they know their stuff. It has been a real pleasure working with them."

The Apollo 13 astronaut minifigs are available individually or together as part of a special collector's set that includes a backdrop patterned after the image NASA used for the crew's official portrait in 1970.

"I researched the original Apollo 13 backdrop for the crew photos, dug up a vintage image of the Eagle Nebula that was a pretty good match and then tweaked it to be even closer," Spain told collectSPACE.

The Lovell, Haise and Swigert set, which is offered with either LEGO-yellow or flesh-tone faces, also comes with a replica of the mission's command module carbon dioxide scrubber (miniature LEGO sock, plastic bag, oxygen hose and checklist cover to convert the square scrubber to fit into a lunar module's round receptacle is not included).

Flight director Gene Kranz comes only as part of his own collector's set, featuring a Mission Control backdrop and two versions of NASA's Apollo 13 flight plan: one with the cover as issued 45 years ago, and the other featuring two "options" — success or failure (failure is crossed out).

If popular, the Apollo 13 minifigures could lead Minifigs.me to offer other Apollo mission crews in the future.

The company previously crafted custom figures modeled after former Canadian astronaut Chris Hadfield and three members of the International Space Station's Expedition 42/43 crew. The latter were revealed aboard the outpost in January, sharing space with their real-life inspirations.