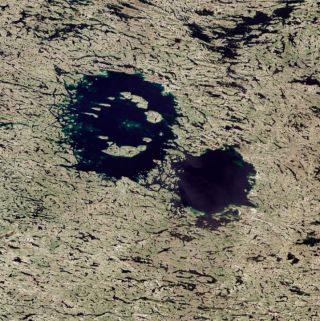 An asteroid smashing into a planet can dramatically alter the planet's habitability by setting back evolution or even encouraging biodiversity.

In order to understand how cosmic impacts influence life and the environment, scientists study the craters left behind. Some of these impact craters come in pairs, most likely caused by binary asteroids. A binary asteroid is composed of two asteroids that are orbiting each other, as well as orbiting the sun.

The Clearwater lakes in Canada are a double crater, but geologist Martin Schmieder of the University of Western Australia, and colleagues, now believe that the craters were formed in two separate events. Their research was recently published in the journal Geochimica et Cosmochimica Acta. [10 Biggest Impact Craters on Earth]

A number of double impact craters exist on Earth. In 1965, researchers proposed that the craters forming the Clearwater lakes were the result of such a single incident. West Clearwater Lake has a diameter of 22.5 miles (36 kilometers), while its eastern cousin is 6 miles (10 km) smaller.

During an impact, rocks from the Earth's crust can be uplifted to form a central peak, or ring, within the center of the crater. In the West Lake, this is evident as a ring of islands in the middle of the lake. The East Lake also has a central peak, but it is below the waters of the lake and was only revealed when the Geological Survey of Canada drilled into the frozen lake in the 1960s.

Measuring the ages of craters

There are a number of different ways to measure the age of an impact crater. Sometimes the layers of rock tell the story as the impact might have occurred at the boundary between two geological time periods. Fossils preserved within rocks can also help place constraints on the age.

It is also possible to use the decay of radioactive isotopes in samples of rocks that were created at the time of the impact to find out the age of a crater. Isotopes can be stable or radioactive, and if they are radioactive, then they will decay into "daughter" products over a known period of time.

Potassium-40 decays slowly into argon-40, so that the more argon-40 present, the older the sample is. However, measuring the ratio of potassium-40 to argon-40 has the disadvantage of the potassium and argon needing to be measured separately. A more reliable variant of this method is to convert the potassium into argon-39. The rock sample is heated to release both the argon-39 and argon-40, so that the two isotopes can be measured at the same time. The amount of argon-39 that it is released indicates how much potassium-40 was originally in the rock. For the Clearwater dating study, this method was applied at the University of Heidelberg in Germany.

The heating of the sample occurs incrementally, in what is known as "step heating." Ideally each argon degassing step should yield the same age, so that when all the individual ages are plotted together on a graph, the age is constant for the entire sample and yields a plateau. This is known as a "plateau age.” However,in some cases a plateau age is not found. Instead, the individual steps often make up a "u-shaped" or "staircase" pattern. [Potentially Dangerous Asteroids (Images)]

The West Clearwater Lake has accurate plateau ages from the argon dating.  Different rock samples all indicate that the crater was formed around 290 million years ago. The new argon ages of 286 million years determined by Schmieder, and his collaborators also agree with this.

The age of the East Clearwater Lake crater is much more difficult to determine. In previous work performed by other scientists, a different isotope method was used to measure the age of the crater. The rubidium (Rb) to strontium (Sr) ratio suggested that this crater is also around 290 million years old, roughly the same age as the West crater. However, this method of dating is ratherunreliable when it comes to dating impact craters.

"Even as a well-established method, Rb/Sr dating has commonly failed in impact crater dating” explains Schmieder. "This is mostly because rubidium is very mobile and the Rb/Sr system is therefore easily disturbed by heating and weathering that affect the impact rocks after their formation.”

Argon ages for the East Lake also show a U-shaped spectrum, rather than a clear plateau age. This makes it more difficult to determine an accurateargon age, but suggests a maximum age of around 460 million years, which would be far older than the dating of the West Clearwater Lake crater.  In 1990, researchers initially calculated a 460-million-year age for the East Lake, but then assumed it to be incorrect out of suspicion that excess argon was contaminating the sample and mimicking an older age for the crater.

However, Schmieder and colleagues also determined an argon age of 460 to 470 million years for the East crater. They consider it highly unlikely that four different rock samples that were collected at different locations and depths at the impact melt layer inside the crater would all yield the same false age.

"We think that the accurate age for the East Clearwater crater was, in fact, already measured back in 1990,” says Schmieder.

The rocks from the West Lake show that they were formed during a "superchron,” which is an unusually extended period of time where no reversals occurred. This superchron, known as the Permo-Carboniferous Reversed Superchron, lasted from 316 to 265 million years ago, which agrees with the age found by the argon dating.

The rocks from the East Lake tell a different story. They have a number of different magnetic polarizations, which indicate viscous remnant magnetization. This is magnetization that is acquired slowly over a long period of time. The more complex magnetic history points to the rocks being much older than the West Lake, as they have had more time to be altered.

The argon-argon age of 460 to 470 million years for the East crater suggests that this impact occurred in the Ordovician time period in a near-coastal environment, when large parts of eastern Canada were occupied by a shallow ocean.

There are geological clues that point towards an impact in a shallow marine or coastalenvironment at the East crater. The rocks from the East crater have more chlorine in them than the West crater, which might be indicative of the presence of sea water. There is also some evidence of the increased movement of hot fluids after the East impact, which altered the rocks. The West crater was formed during the Permian, when the asteroid would have struck the Pangaea landmass.

Despite the fact that it is statistically very unlikely for the two craters to have been formed in two separate impact events, the new evidence unearthed by Schmieder and his team shows that in this case the more unlikely scenario is true.

"Overall, the doublet theory has been so compellingly advocated over the decades that alternative scenarios seem to have been abandoned. In our view, there is a whole line of geologic evidence that argues against the double impact." [Photos: Asteroids in Deep Space]

The impact on life

Impacts that leave behind a 100 kilometer (62.5 mile) diameter crater or less, such as those that struck the Clearwater lakes, are widely thought to have no global effects. In fact, impacts can even increase biodiversity.

For example, the Great Ordovician Biodiversification Event, which saw an explosion in the number of animal species around 470 million years ago, has been linked to frequent impact events at the time. This is possibly due to the fact that an impact could disrupt local life just enough to let another species dominate, or because slowly cooling craters can provide habitats for life.

Even if the Clearwater Lakes impacts were caused by a double impact, the extra energy released by two bodies smashing into the Earth simultaneously would have had no significant effect on life. While the fireball and earthquake would have decimated any life within a few hundred kilometers, the impacts were not big enough to cause much chaos on a global scale.