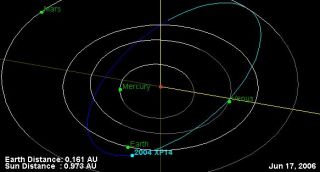 An asteroid possibly as large as a half-mile or more in diameter is rapidly approaching the Earth.  There is no need for concern, for no collision is in the offing, but the space rock will make an exceptionally close approach to our planet early on Monday, July 3, passing just beyond the Moon's average distance from Earth.

Astronomers will attempt to get a more accurate assessment of the asteroid's size by "pinging" it with radar.

And skywatchers with good telescopes and some experience just might be able to get a glimpse of this cosmic rock as it streaks rapidly past our planet in the wee hours Monday.

The asteroid, designated 2004 XP14, was discovered on Dec. 10, 2004 by the Lincoln Laboratory Near Earth Asteroid Research (LINEAR), a continuing camera survey to keep watch for asteroids that may pass uncomfortably close to Earth.

Although initially there were concerns that this asteroid might possibly impact Earth later this century and thus merit special monitoring, further analysis of its orbit has since ruled out any such collision, at least in the foreseeable future.

Asteroid 2004 XP14 is a member of a class of asteroids known as Apollo, which have Earth-crossing orbits. The name comes from 1862 Apollo, the first asteroid of this group to be discovered. There are now 1,989 known Apollos.

Due to the proximity of its orbit to Earth [Map] and its estimated size, this object has been classified as a "Potentially Hazardous Asteroid" (PHA) by the Minor Planet Center in Cambridge, Massachusetts. There are currently 783 PHAs.

Spotting 2004 XP14 will be a challenge, best accomplished by seasoned observers with moderate-sized telescopes.

As 2004 XP14 makes its closest approach to Earth, astronomers will attempt to gauge its size and shape by analysis of very high frequency radio waves reflected from its surface.

Such radar measurements of the exact distance and velocity of the asteroid will allow for precise information on its orbit.  From this scientists can also discern details of the asteroid's mass, as well as a measurement of its density, which is a very important indicator of its overall composition and internal structure.

Astronomers plan to utilize NASA's 70-meter (230-foot) diameter Goldstone radar, the largest and most sensitive antenna in its Deep Space Network.  Located in California's Mojave Desert, the Goldstone antenna has been used to bounce radio signals off other Near-Earth asteroids many times before, and it is now being readied to "ping" 2004 XP14 on July 3, 4 and 5.