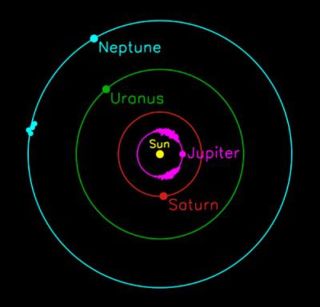 A schematic of the outer solar system in which the "Trojan" asteroids can be seen sharing the orbits of Jupiter and Neptune. At either of two points 60 degrees away from each planet, the gravitational forces of the planet and the Sun combine to lock the asteroids into a stable, synchronized orbit.
(Image: © Scott Sheppard)

Thefinding, detailed in the June 16 issue of the journal Science, brings thetotal number of the gas giant's asteroid companions, or "Trojans," up to four.

The highlyinclined orbit of one of them supports the hypothesis that the Neptune Trojanswere captured from a much larger asteroid "cloud" that surrounds theplanet, and that they are not the broken remains of some larger object as somescientists have speculated.

TheTrojans gather around one of Neptune's two so-called "Lagrangian"points. In these regions--located 60 degrees in front of and behind the planetin its orbit--the Sun and Neptune's gravity combine to ensnare passing objects.

The orbitof one of the new Trojans is tilted about 25 degrees relative to the plane thatNeptune orbits the Sun, compared to only about 5 degrees for the other threeTrojans.

The way thesurvey was set up, it was very unlikely that such a highly inclined objectwould be detected. The fact that it was indicates that there are at least asmany--and possibly more--highly inclined Trojans existing far from the solarsystem plane compared to low inclination ones, said study team member ChadwickTrujillo of the Gemini Observatory Hawaii.

"TheNeptune Trojans are a thick 'swarm,' not a thin population confined to theplane," Trujillo told SPACE.com.