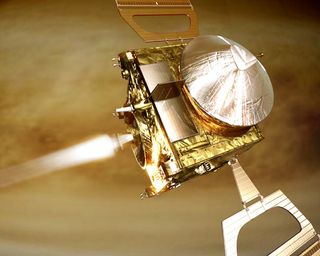 A probe circlingthe planet Venus has slipped into its final orbit around the cloud-coveredworld, though final instrument checks are still underway, the European SpaceAgency (ESA) said Tuesday.

"This is the orbit designed to perform the bestpossible observations of Venus, given the scientific objectives of the mission,"said H?kan Svedhem, Venus Express project scientist for the ESA, in a statement.

When Venus Express first entered orbit around itsdestination world, the probe's orbit varied in altitude between 248 miles (400 kilometers) and217,479 miles (350,000 kilometers). Despite the large distance to Venus at itsfarthest point, that initial, nine-dayorbit excited researchers since it gave them their only global views ofVenus for the planned 243-Earth day mission.

Two daysafter making orbital arrival, Venus Express returnedimages of its target planet's south pole - the first-ever of Venus -finding a previously suspected vortex that appears to be a counterpart to anorth pole structure.

The $226million (220 million Euro) Venus Express mission launchedfrom Earth in November 2005 as the ESA's fastest-developed expedition to date. Itis the first dedicated orbiter to visit the planet since NASA's Magellan probe, whichended its mission with a death plunge into the Venusian atmosphere in 1994.

Checks ofthe Venus Express' sevenprimary instruments will continue until about June 4, when the spacecraft'sscience phase is slated to begin, mission managers said.