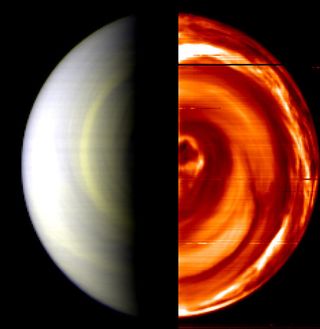 The latest images from Venus show a previously suspected dark vortex over the south pole of the planet.

Sending the first ever images of this planet's south pole, the European Space Agency's (ESA) Venus Express mission shows the unexplained formation from a distance of 128,283 miles (206,452 kilometers).

The vortex corresponds to a similar cloud structure over the north pole of the planet.

"Just one day after arrival, we are already experiencing the hot, dynamic environment of Venus," said Hakan Svedhem, Venus Express project scientist. "We will see much more detail at an unprecedented level as we get over 100 times better resolution as we get closer to Venus, and we expect to see these spiral structures evolve very quickly."

After five months of spaceflight, Venus Express entered the planet's orbit on April 11 with the goal of reaching a elliptical orbit's maximum height of 217,479 miles (350,000 kilometers) below the south pole before swinging back up to pass the minimum height at an altitude of 155 miles (250 kilometers) over the planet's north pole.

The ESA launched its $226 million probe in November 2005. This is the first time since NASA's successful Magellan mission, which ended with the spacecraft's plunge into the Venusian atmosphere in 1994, that the planet has had an orbiter around it.