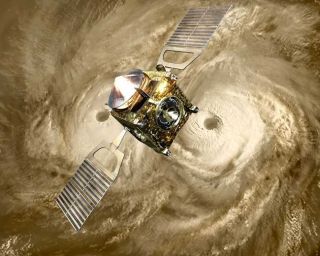 An artist's vision of the ESA's Venus Express probe in orbit around its cloudy target. The probe entered orbit around Venus on April 11, 2006.
(Image: © ESA/AOES Medialab.)

DARMSTADT, Germany --Europe's Venus Express probe entered orbit around Venus early Tuesday to begin a planned 16-month mission to study a planet on which the greenhouse effect has gone to hellish extremes.

The European Space Agency(ESA) probe fired its main engine today for a 50-minute braking maneuver toallow itself to be captured by the gravitational pull of Venus.

Venus Express managers atESA's mission control center here had loaded the engine-firing commands to thesatellite several days before, and had little more to do than watch theirscreens and hopethe sequence went as planned.

"It's agreat day for ESA," said ESA director-general Jean-Jacques Dordain after VenusExpress' successful orbital arrival. "It's a happy day for all of us."

"We weresweating for a few minutes," said Manfred Warhaut, Venus Express flightoperations for the ESA, in a post-orbit arrival press conference.

Applause followed theconfirmation that the signal had been acquired anew. But there were 12 moreminutes of engine burn that were needed to further slow the satellite's speedand confirm its capture by Venus.

Mission controllers applauded when thesignal confirmed that the engine had completed its burn and shut down, making Venus Express the first dedicated orbiter to study its cloudy target since NASA's Magellan mapping probe plunged into the planet's atmosphere in 1994.

"It's a fantasticmoment," said Don McCoy, Venus Express project manager at ESA. "We'refinally around Venus. The S-band signal tells us we are in orbit. If we didn'tget at least 46 minutes of engine burn, we basically would just fly past theplanet."

Venus Express' initialnine-day orbit is designed to be highly elliptical ranging from an altitudeof between 248 miles (400 kilometers) and 217,479 miles (350,000 kilometers)above Venus' surface, and gives the probe its only view of the entireplanet's disk during its mission, mission managers have said. Two more burnswill be conducted in the coming days to bring the orbit into its operationalaltitude of between 155 miles (250 kilometers) and 41,010 miles (66,000kilometers).

"This isreally a fantastic experience to see that we ended up in exactly the position wewanted to be in," Venus Express project scientist H?kanSvedhem said in the press conference. "Now our work starts."

Launchedin November 2005, the ESA's $264 million (220 million euros) Venus Expressmission is not expected to begin full operations until mid-May, but missionmanagers will begin switching the probe's sevenobserving instruments by Wednesday with the first image to arrive on Thursday,ESA officials said.

Evidence from pastsatellite missions - the United States and Russia have sent more than a dozen satellitesto Venus since the 1960s - shows that Venus once featured surfacewater.

"We have many questionssurrounding Venus," Svedhem said, adding that the planet appears to have sharedmuch in common with Earth during its early days. "Why is Venus the way it is,why is it not like Earth?"

For reasons not yetunderstood, Venus' atmosphere built up huge amounts of carbon dioxide, whichtrapped the sun's heat and drive temperatures to around 890 degrees Fahrenheit(477 degrees Celsius). It is an extreme example of the same greenhouse effectthat operates on Earth, and scientists want to learn lessons from Venus thatmight be of use on this planet.

"If you want to findout about things on our own little planet, you have to look out," saidDavid Southwood, ESA's science director.

Initially designed for a 243-Earthday - or two Venusian day - mission, Venus Express has enough fuel remaining todouble its time at the second planet from the Sun thanks to a spot on launchfrom Earth, mission managers said.

"We have quite a good margin of fuel on board," McCoy said, adding that VenusExpress could study its cloudy target for up to six years if its extendedmission is approved. "Right from the very instance of separation from ourlauncher, we've had an excellent trajectory to Venus."