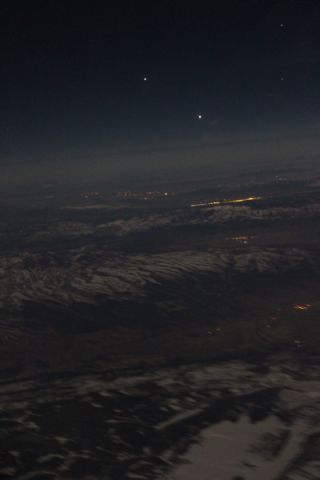 Venus and Jupiter have been dancing toward each other in the night sky for months, and they'll finally come together this week in a dazzling show for skywatchers.

Beginning tonight (March 12), the two brightest planets in the sky will be so close together that you'll be able to block both of them out with a few fingers held at arm's length. The celestial action peaks Thursday (March 15), when Venus and Jupiter line up in what's known as a planetary conjunction.

Venus-Jupiter conjunctions are fairly special events, occurring roughly every 13 months. And this one should be the best conjunction for several years to come for viewers in the Northern Hemisphere, experts say, because the two planets will be visible for so long in the evening sky. At mid-northern latitudes on Thursday, the pair should blaze bright over the western horizon for about four hours after sunset.

Though Jupiter is about 11 times wider than the roughly Earth-size Venus, Venus shines much more brightly than the gas giant from our perspective — about eight times more brightly this week, in fact. [Video: Jupiter & Venus Loom Large]

That's because Venus is much closer to us than Jupiter is. On average, Earth orbits 93 million miles (150 million kilometers) from the sun, a distance defined as 1 astronomical unit (AU). Venus zips around our star at about 0.72 AU, while Jupiter is found roughly 5.2 AU away from the sun.

Through a telescope, Jupiter and Venus look very different. Jupiter's atmosphere displays many complex bands and swirls, including the famous gargantuan storm known as the Great Red Spot. Venus, on the other hand, presents only a bland, whitish deck of clouds.

But beneath the clouds, the Venusian surface is anything but bland. The hellishly hot planet — which has an average surface temperature of roughly 860 degrees Fahrenheit (460 degrees Celsius) — harbors numerous craters, mountains and valleys.

Venus and Jupiter will part ways after this week, each heading off toward a different patch of sky. Be sure to check back in with Venus in a few months; on June 5, the planet will cross the face of the sun from Earth's perspective, appearing as a tiny black dot against the face of our star.

Such Venus transits occur fewer than two times per century, on average. After June 5, the next one will take place in 2117.