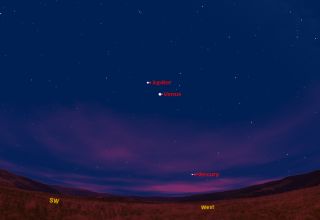 This sky map shows the locations of planets Jupiter, Venus and Mercury in the evening sky just after sunset on March 8, 2012 to observers at mid-northern latitudes.
(Image: © Starry Night Software)

The two brightest planets in the sky, Venus and Jupiter, will likely draw attention to the western sky as darkness falls next week.

Planetariums, observatories and perhaps even weather forecast offices might get a number of inquiries about what those "two bright lights in the sky" are.

This weekend, Venus shines to Jupiter's lower right, moving up on it day by day. On Monday evening (March 12) they'll appear to line up side-by-side, and on Tuesday evening (March 13), they will be separated by just 3 degrees (about the width of two fingers held out at arm's length), with Venus standing just above and to Jupiter's right.

Shining in a completely dark sky for more than two hours before finally disappearing beyond the west-southwest horizon after 10:30 p.m. local daylight time, this planetary pair may appear even more eerie when they're sitting just above the horizon as opposed to when they appear higher in the sky. [Video: Jupiter & Venus Loom Large]

There are also three interesting aspects concerning this eye-catching configuration.

When the planets are closest, Venus will glow at magnitude -4.3, while Jupiter will shine at -2.1 on astronomers' magnitude scale in which lower numbers correspond to brighter objects (negative numbers suggest an extremely bright view).

During the second century B.C., the Greek astronomer Hipparchus placed the naked-eye stars into six brightness categories. We still use his methodology today: The lower the figure of magnitude, the brighter the object.

Then in 1856, British astronomer Norman Pogson defined Hipparchus's magnitude scale mathematically, making it follow a logarithmic relationship, in which two objects that differ in brightness by five magnitudes differ in apparent brightness by a factor of exactly 100. In other words, an increase of one magnitude represents a brightness increase that is equal to 2.512.

So the brightness factor equals 2.512 raised to the power of the magnitude difference.  In the case of Venus and Jupiter, their 2.2 magnitude difference works out to a light ratio difference of 7.59. Thus, Venus will appear nearly eight times brighter than Jupiter. Check it out for yourself.

Contrary to popular belief, conjunctions between Venus and Jupiter are not rare events; in fact they occur on average about every 13 months. Interestingly, the sidereal revolution periods (that is, the time it takes them to make one full orbit relative to the stars) of Venus, Earth and Jupiter are, respectively, 224.7008, 365.2564, and 4332.5894 days.

So 39 such periods of Venus are virtually equal to 24 orbital periods of the Earth and 2 periods of Jupiter.  For this reason, circumstances involving specific conjunctions between Venus and Jupiter repeat under almost identical conditions after a time span of just over 24 years.

Looking ahead, on March 22, 2036, these same two planets will come to conjunction once again, with Venus passing 4 degrees north of Jupiter.

While you're out on Tuesday (March 13) making sure Venus is about eight times brighter than Jupiter, try to also imagine that no less than six full moons can be lined up in the space between those planets. This is because the apparent width of the moon equals about 0.5 degrees, so certainly six moons should fit the 3-degree gap between the two planets.

And yet it doesn't seem possible when you're looking at them in the actual sky; the illusion is maddening.  You might think two or three moons maybe, but it seems impossible that six moons can be squeezed into the gap between the planets. And yet they can.

Interestingly, this strange illusion also extends to the "pretend universe" of the planetarium.

When the first star projectors were designed back in 1927, the moon and sun were made to appear to extend across 0.5 degrees as they would on the real sky.  But it was quickly discovered that they appeared too small to look realistic, although they were in actuality the correct angular size.

Engineers, therefore, decided to double the image sizes of the moon and sun to 1 degree each, which presented a much more realistic appearance, a practice that continues to this very day. It's one of the few places in the planetarium where accuracy was sacrificed for realism.