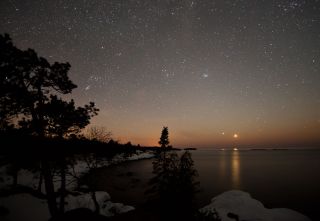 Skywatcher Shawn Malone captured this view of Venus and Jupiter from near Eagle Harbor, Mich. In the image, the bright planets are setting over Lake Superior.
(Image: © Shawn Malone)

If you happen to see two intensely bright "stars" in the night sky tonight, you are probably looking at a pair of dazzling planets: Venus and Jupiter are unmistakable bright lights that spent the past several weeks cozying up to one another in the evening sky, but are now moving away on their orbital paths.

The two planets shone brightly together like beacons on March 13, but the luminous worlds will line up again for another skywatching event that spans across two days: Sunday (March 25) and Monday (March 26). During the so-called conjunction, Venus and Jupiter will line up in the western sky at sunset, performing a heavenly duet.

Venus-Jupiter conjunctions occur roughly every 13 months, but this one should be the best conjunction for several years to come for viewers in the Northern Hemisphere, NASA scientists have said.

The agency will host a live webchat on Sunday (March 25) from 8 to 10 p.m. EDT (0100 to 0300 GMT March 26), during which NASA expert Melissa McGrath will answer questions about the conjunction. The webchat will also feature a live-streamed view of the planets as they brighten the night sky.

Venus and Jupiter are two of the brightest planets in the night sky, making them relatively easy to find because they should appear much more luminous than any stars. If you have clear skies overhead, you should be able to spot these eye-catching worlds with your naked eyes.

Binoculars or a small telescope will reveal Venus to be a round, featureless disk rather than just a point of light. A modest amateur telescope can help you discern the colorful cloud bands of Jupiter. [Last Dance for Venus, Jupiter and the Moon]

On Sunday, the moon will also appear to dance near Venus and Jupiter. A slender crescent moon will hover slightly above Jupiter, at about 3 degrees to the right (holding your clenched fist at arm's length is roughly equal to 10 degrees).

By Monday evening, the moon will appear closer to Venus. The crescent will be located less than 3 degrees to the left and just slightly above Venus.

Venus is the second planet from the sun, and the brightest planet in our night sky, when it's visible. In ancient times, the planet was thought to be two different stars — the evening star and the morning star. This is because as Venus circles the sun inside Earth's orbit, the celestial body is visible for about 9 1/2 months in the evening sky, and then alternates, spending approximately the same amount of time in the morning sky.The rest of the time it’s behind the sun or in front of the sun and hidden by its glare.

Venus takes about 225 Earth days to travel around the sun. The planet also rotates the opposite way that Earth does on its axis. So on Earth, the sun rises in the east and sets in the west, but on Venus the sun would rise in the west and set in the east.

Currently, the other bright light in the night sky is the planet Jupiter, but over the next several weeks, it will slowly slip out of view. As April comes to a close, Jupiter will become much more difficult to see as it sinks lower into the sunset and is no longer visible. For most people, the last time they will likely be able to pick our Jupiter in the sky is around April 24, Rao said.

Through a telescope, Jupiter and Venus will look very different, with Jupiter's atmosphere creating a swirling mix of clouds. The gas giant's famous Great Red Spot, which is actually a massive brewing storm, also sets it apart. Venus will appear relatively bland, with a whitish deck of clouds.

If you own a telescope, don't forget to also look out for Jupiter's four largest moons: Io, Europa, Ganymede and Callisto. As the moons dance around Jupiter, their positions every night will differ, but these natural satellites have been known to put on a celestial show for lucky skywatchers.

Editor's note: If you snap an amazing photo of Venus and Jupiter, or any other skywatching target, and would like to share it for a possible story or image gallery, please contact Denise Chow at dchow@space.com.