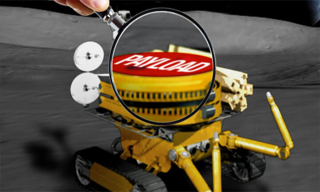 NASA has launched a "Honey, I Shrunk the NASA Payload" contest to send tiny experiments to the moon.
(Image: © NASA)

Do you love adorable, tiny things? Have you ever dreamed of having something you designed land on the moon? If you answered yes to both these questions, you should probably enter NASA's new competition: "Honey, I Shrunk the NASA Payload."

NASA's Jet Propulsion Laboratory (JPL) has issued a public challenge for people to design instruments that could support a long-term human presence on the moon. The contest's name references the hit movie "Honey, I Shrunk the Kids," which debuted in 1989.

"Smaller payloads are game-changing," Sabah Bux, a JPL technologist, said in a NASA statement. "They will allow us to develop technologies to do more prospecting and science on smaller, more mobile platforms."

Those who enter the competition have the chance to win a portion of $160,000 which will be spread among prizes in various categories, according to the statement. JPL has teamed up with the NASA Tournament Lab to launch the contest on the heroX crowdsourcing site.

NASA has big lunar ambitions. With the Artemis program, the agency intends to return humans to the moon by landing the first woman and the next man on the surface by 2024. The agency hopes to create a sustained human presence on the moon that will support both scientific research and a future crewed mission to Mars.

But, to explore the moon, researchers and future lunar astronauts will need to recruit a host of robots. NASA is already developing rovers for the moon like VIPER (the Volatiles Investigating Polar Exploration Rover), which will travel to the moon's south pole in search of water ice. But smaller rovers could potentially cover more ground and collect important scientific data using less fuel and power.

So, in the new challenge, the agency is looking for people to submit designs for tiny payloads, no bigger than a bar of soap, that could hitch a ride to the moon and help gather this critical data.

To qualify for the challenge, designs must be no bigger than 3.9 inches by 3.9 inches by 1.9 inches (100 millimeters by 100 mm by 50 mm and weigh no more than 0.8 lbs. (0.4 kilograms). Designs will be accepted through June 1 and more information is available here.

Future NASA challenges will call for people to prototype, test and build complete these mini payloads, according to the statement.

For more details on the "Honey I Shrunk the NASA Payload" contest, including how to apply and entry requirements, click here.