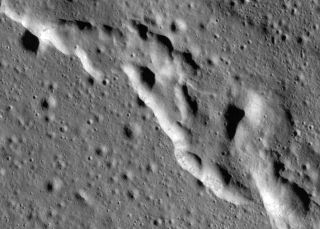 An image of wrinkles in the moon's surface near Mare Frigoris, as seen by NASA's Lunar Reconnaissance Orbiter.
(Image: © NASA)

NASA has a serious case of lunar fever, with an ambitious goal to land humans on the moon in 2024. But those plans rely on an existing spacecraft with origins dating back to NASA's last moon-mission dreams.

NASA's Lunar Reconnaissance Orbiter launched in 2009 and has been studying the moon ever since. Originally, the mission was just the first of a suite of lunar missions, designed to find places for humans to land on the moon. But LRO was launched with plans to be reclassified as a science mission one year in, and as that happened, NASA's interest in sending astronauts to the moon happened to wane as well. Nine years later, NASA is ready to comb through the mission's data for possible human landing sites after all.

LRO was the first piece of a massive space program announced by then-President George W. Bush. Born after the Columbia shuttle disaster, the program focused on human spaceflight beyond low Earth orbit. It called for retiring the space shuttles in 2010, launching astronauts on a new NASA rocket in 2014, and visiting the moon in 2020 as a first step toward more distant locations, according to a detailed analysis by the Planetary Society.

In a speech announcing the program, which was later dubbed Constellation, Bush referred to robotic missions as well, releasing talking points that set a goal for probes to the moon by 2008. "The moon is a logical step toward further progress and achievement," Bush said, according to a transcript of the announcement. "Robotic missions will serve as trailblazers, the advanced guard to the unknown."

The first of those probes was LRO, which flew with a companion mission dubbed Lunar Crater Observation and Sensing Satellite, or LCROSS. That mission watched the duo's own second-stage rocket slam into the moon's south pole, creating an artificial crater and spewing out moon rock. LCROSS studied that material, confirming the presence of water molecules in the region.

Those molecules seemingly confirmed one of the premises of the Constellation program, that the moon could be a resource depot for humans. One day, the thinking goes, it may be possible to turn buried ice into drinking water or rocket fuel or both, making it cheaper for humans to stay longer on the moon and reducing the costs of exploration deeper into the solar system.

But as LRO was launched and GRAIL was approved, NASA's priorities were already shifting. Bush had left office, and in August, two months after LRO launched, a government report questioned Constellation's approach. Another two months later, the rocket NASA was building for crewed flights in the program made a disappointing performance in a launch test, according to the Planetary Society analysis.

In early 2010, President Barack Obama's budget request eliminated the Constellation program in favor of more time on the space station, commercial launchers and bigger NASA rockets. Later that year, he explained that his first crew destination beyond low Earth orbit would be a near-Earth asteroid.

And just like that, the moon's primacy began to wane. By the mid-2010s, the missions that had followed LRO had all wrapped up, and the orbiter had been joined by only two probes, dubbed ARTEMIS, that are reincarnations of solar system spacecraft.

"LRO was envisioned as this necessary precursor mission to say, well, where are we going to go, and where are the safe landing sites on the moon?" Petro said. But that exploration mindset hasn't limited the mission's work as NASA priorities have changed. "As that went away, there was still this recognition that the moon was woefully understudied as an object."

The spacecraft was launched with seven different instruments designed with exploration in mind, several looking for water ice. One measured radiation and explored what long-term radiation exposure might do to human tissue. One evaluated the texture of the surface terrain, flagging areas that might be flat enough for safe landings and areas that may never fall into shadow, making them potential targets for solar panels.

Beyond its potential exploration uses, lunar water is also a key science question: studying it may help researchers understand where Earth's own water came from. Safe landing sites are just as important for robotic missions as for human missions. LRO's camera suite, which addresses the water ice and landing site questions, also provides scientists with a detailed look at the moon's continuing impact history, as etched in its surface by craters.

"LRO easily transitioned from this exploration-enabling mission to this science mission," Petro said. "The data that we collect doesn't care if it's being used for exploration or science."

But now, a decade into its tenure, the mission's goals are changing once again. In December 2017, during his first year in office, President Donald Trump pivoted NASA's focus again. His Space Policy Directive 1 called for sending humans back to the moon, eyeing a long-term presence there.

Earlier this year, that policy was given an accelerated timeline, with human missions planned for 2024 and targeting the same south polar region where LRO's old companion crashed down.

NASA is once again all-in on the moon — and LRO is still there, ready to go.

Petro isn't fazed by the resurgence of an exploration mindset either. "My dad worked on the Apollo program and so certainly, in my DNA is this interest in the moon," Petro said. "To be in the midst of this renewed era of lunar interest and associated with and leading this incredible mission is just totally awesome — which I know sounds trite, but it's completely true."