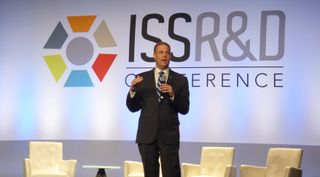 NASA Administrator Jim Bridenstine discussed his desire to support industrialization of low Earth orbit in a July 31 speech at the ISS Research and Development Conference in Atlanta.
(Image: © SpaceNews/Jeff Foust)

ATLANTA — NASA Administrator Jim Bridenstine says he believes the agency’s new strategy for increasing commercial use of the International Space Station will lead to an "industrialization" of low Earth orbit, although experts warn it may take time for those markets to emerge.

In a July 31 speech at the ISS Research and Development Conference here, Bridenstine argued it was essential to build up commercial activities on the ISS and elsewhere in LEO to support not just the space industry, but also the overall national economy.

"Industrialization builds nations, and if we want to build space, we need to industrialize," he said. "The International Space Station is an amazing tool for that activity."

Related: In Pictures: Private Space Stations of the Future Imagined

Research and development projects on the ISS, Bridenstine explained, can lead to commercial activities in low Earth orbit, with implications for the broader national economy.

"We want space to be utilized to improve the human condition here on Earth," he said. "We want to prove capabilities and prove technologies, prove markets, that ultimately enable us to do more in space and have more people in space, more projects in space, commercialize space, industrialize space and, of course, have this be a major driver for the United States of America economically when it comes to the balance of payments and exports. That's the ultimate objective of the United States of America leading in space."

A key aspect of that effort, he said, is NASA’s relationship with the ISS National Lab, the organization formerly known as the Center for the Advancement of Science in Space that operates the portion of the ISS resources designated by Congress as a national lab. Bridenstine met with ISS National Lab officials while at the conference after praising, in his speech, new initiatives by the organization in industrialized biomedicine and advanced materials.

Asked at a press conference later in the day if NASA's commercialization strategy might lead to changes in the agency’s relationship with the ISS National Lab, Bridenstine said "absolutely" but didn’t elaborate. "We have a mandate to commercialize low Earth orbit, to industrialize low Earth orbit, to the point where NASA becomes a customer rather than the owner and operator," he said. "What are the lines of effort that ultimately result in this commercialization?"

Joseph Vockley, president and chief executive of the ISS National Lab, said his organization had a good relationship with NASA and that, by supporting research on the station, it can mature technologies to the point where they can become commercially viable. "We feel like we have a great opportunity to help NASA achieve their goals, our goals, and benefit humankind," he said.

A panel of industry experts, speaking at the conference immediately after Bridenstine's speech, cautioned that it may take time for that industrialization of low Earth orbit to emerge.

Carissa Christensen, chief executive of Bryce Space and Technology, said that in the near term the biggest markets will involve human spaceflight: flying government astronauts from the United States or other countries, as well as private astronauts. Those markets, she said, will be in the hundreds of millions of dollars. Satellite assembly and manufacturing could emerge later on at a smaller size: tens of millions of dollars, or possibly more.

"There are factors that can dramatically change these outcomes," she added, including "interventions" like NASA's LEO commercialization strategy as well as the development of "killer apps" and benefits that come from increased space activity in general.

A study by SpaceWorks Engineering identified about 40 potential LEO markets, which the company grouped into those that are active today, "emerging prospects" that could emerge in the next five to ten years and "near science fiction" ones that will take far longer to develop.

Caleb Williams, lead economic analyst at SpaceWorks, said those emerging prospects include industrial biomedicine, space tourism, production of optical fibers and advertising. "They're not currently part of the LEO economy because they haven't quite reach full commercial operations yet, but they either have very mature technology or a very mature business model," he said. "That makes them attractive.”

One reason NASA is emphasizing this commercial strategy is to eventually transition away from the ISS, and in the process reduce its costs. "We want to take the resources that the taxpayers give us and we want to do things for which there is not yet a commercial marketplace," Bridenstine said at the press conference, including a human return to the moon and eventual missions to Mars.

He acknowledged, though, that the timetable for that transition is not clear. NASA would like to have enhanced commercial capabilities in place by 2025, but Bridenstine noted legislation in the House and Senate would extend NASA’s authorization to operate the ISS to 2030. "We are committed as a nation to making sure that we have no gap in American human activity in low Earth orbit," he said.