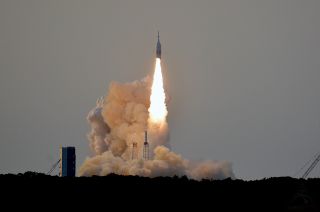 NASA's Orion Ascent Abort-2 (AA-2) test lifts off from Complex 46 at Cape Canaveral Air Force Station in Florida on July 2, 2019. The test qualified the Launch Abort System (LAS) to be used to keep astronauts safe on Artemis launches to the moon.
(Image: © collectSPACE.com)

NASA's efforts to return humans to the lunar surface took a short but critical leap forward on Tuesday (July 2), in a test that evoked the last time the space agency shot for the moon.

The Ascent Abort-2 (AA-2) test, part of NASA's Artemis moon program, lasted only three minutes, but the 6-mile-high (10-kilometer) flight validated the Launch Abort System (LAS) that will keep astronauts safe in the event of a catastrophic failure during their climb into space.

A similar system and series of tests were carried out more than 50 years ago as part of NASA's Apollo program that succeeded in landing the first humans on the moon in July 1969.

"Why is this hugely important? Because we have the world's largest and most powerful rocket in the SLS [Space Launch System] being built that is going to carry the Artemis missions into space and beyond low Earth orbit," said NASA astronaut Randy Bresnik, assistant to the chief of the astronaut office for exploration at Johnson Space Center in Houston. "You need an even more powerful launch abort system to pull the crew away from it if there is a problem with that rocket."

"The next time this full launch abort system flies, there will be crew underneath it on Artemis 2," said Bresnik, referencing NASA's plan to fly a crew around the moon prior to landing the next man and the first woman on the lunar surface on the Artemis 3 mission in 2024.

The AA-2 flight test comprised four major components: a boilerplate, or simplified version of the capsule-shaped Orion crew module, built in-house by NASA; a separation ring representing the European-built Orion service module; an Orion LAS, including a tower supporting an abort motor and attitude control motor supplied by Northrop Grumman and a jettison motor made by Aerojet Rocketdyne; and the test booster, a refurbished Peacekeeper intercontinental ballistic missile (ICBM) also manufactured by Northrop Grumman and provided by the Air Force.

The 93-foot-tall (28-meter) stack lifted off at 7 a.m. EDT (1100 GMT) from Complex 46 at Cape Canaveral Air Force Station in Florida, at the opening of the test flight's four-hour launch window.

Fifty seconds later, when the vehicle reached maximum dynamic pressure at roughly 6 miles in altitude, the test sequence initiated. The abort motor fired, pulling the crew module safely away from the booster as it climbed an additional 2 miles in 15 seconds. Had there been a crew aboard, the astronauts would have experienced about 7 Gs, or seven times the force of gravity.

At about 8 miles (13 km) high, the control motor activated to orient and flip the capsule to separate the Orion boilerplate. The jettison motor then fired to pull the LAS tower from the crew module, releasing the capsule to tumble down to the ocean.

"What you [didn't] see was parachutes because for this particular flight, that is not one of our primary objectives. We've tested the parachutes thoroughly [on earlier trials], so we are not using parachutes for this test," said Devolites, explaining that the capsule, the LAS and booster were intended by design to hit the water, break apart and sink into the Atlantic Ocean.

During the capsule's descent, though, 12 data recorders were jettisoned as a back-up to the flight's radio-transmitted telemetry. The recorders, which were colored bright orange, outfitted with beacons and packaged to float, were to be recovered for analysis. A total of 890 instrumentation readings were recorded during the test flight.

As its name implies, the Ascent Abort-2 test was the second full-up flight of the Orion LAS. In 2010, NASA conducted a similar test, Pad Abort-1, which simulated a problem while the rocket was still on the launch pad.

"When we flew the pad abort test several years ago, we did note several items that we wanted to improve upon. For example, we made the abort motor smaller, we didn't need quite as much thrust. We changed the jettison motor insulation materials and improved the attitude control motor. All of those changes were incorporated into this Ascent Abort-2 motor and it is intended to be the production version," said Mark Kirasich, NASA's Orion program manager.

The AA-2 flight was also informed by a series of tests done more than 50 years ago, in the lead up to the Apollo missions to the moon. NASA conducted two pad aborts and five Little Joe II in-flight abort tests to qualify the Apollo launch escape system that topped the Saturn V rocket.

"This is very similar to the Little Joe tests, the purpose is the same, to launch the spacecraft and then demonstrate the abort capability," said Kirasich. "Our launch abort system is improved over the Apollo. It is a similar architecture, we call it a 'puller' in that the launch abort system pulls the spacecraft away as opposed to pushing it away. But past that, the biggest change from the Apollo is the attitude control motor."

The Apollo launch escape system was only equipped with a pitch motor, such that it could flip but not orient the crew capsule for descent.

"This launch abort system has an attitude control motor, which will stabilize the rates and fly in the desired direction. So it is a really big improvement over the Apollo system," said Kirasich. "We talk about the abort envelope, and that's the abort conditions that you can successfully abort from. Our envelope is expanded from the Apollo envelope because of this abort motor."