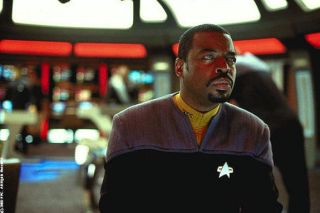 "Star Trek: The Next Generation" actor LeVar Burton is in talks to reprise his role as Geordi La Forge for season two of CBS All Access' "Star Trek: Picard."

"I think it's reasonable to assume that those people are part of Picard's life," Burton told Entertainment Tonight, before confirming an appearance is in the works. "Well, what the hell, absolutely. You'll see us all."

"I've suggested to the producers that we find Geordi in a position where he's teaching, passing his knowledge on to other people," Burton explained. "We’ll see. [Alex Kurtzmann] and the folks in charge are doing an amazing job, when they call, whatever it is they want me to do, I'm pretty sure it's gonna be spectacular."

Burton went on to confirm that no filming has taken place, and his appearance is still in the negotiation stage. Several other "Next Generation" castmembers including Marina Sirtis, Jonathan Frakes, and Brent Spiner appeared in "Picard" season one.