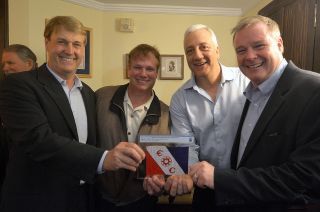 The Explorers Club president Richard Wiese (at left) accepts the donation of an Explorers Club flag from Mark Armstrong (second from left), with astronaut Mike Massimino and explorer David Concannon at The Explorers Club headquarters in New York City on May 22, 2019. The flag was carried by Mark's father, Neil Armstrong, to the surface of the moon on Apollo 11, the first moon landing mission, in July 1969.
(Image: © collectSPACE.com)

For more than a century, explorers have traveled to the farthest reaches of, and off, our world, carrying with them a banner of the club that unites them all. Now, one such flag that accompanied what is perhaps the most famous exploration of them all has arrived back to where it began.

On Wednesday (May 22), the red, white and blue, compass-adorned flag that was personally flown by Apollo 11 astronaut Neil Armstrong on humanity's first moon landing mission was presented back to The Explorers Club in New York City, 50 years after the historic expedition.

"After seeing an advertisement on a Heritage Auctions' website, The Explorers Club sought the return of an Explorers Club flag that Neil Armstrong carried to the lunar surface on Apollo 11 in 1969," The Explorers Club said in a statement provided exclusively to collectSPACE.com. "Although the parties have since agreed that, in this unique situation, commander Armstrong was the rightful owner of this flag, Neil's sons, Rick and Mark Armstrong, have graciously agreed to donate the flag to this esteemed organization so that it can hang in their dedicated 'Apollo Room' for posterity."

"The Explorers Club is immensely grateful for this charitable donation, and all parties are appreciative of Heritage Auctions for their effort in making this thoughtful gesture possible," the statement concluded.

The 4-inch by 6-inch (10- by 15-centimeter) nylon flag had been listed in Heritage Auctions' second sale to feature items from the Armstrong Family Collection, held May 9 to 11 in Dallas, Texas. In addition to The Explorers Club flag, the auction also included Armstrong's Ohio State flag, a U.S. Naval Academy flag and a large, 18-inch by 11.5-inch (45- by 29-cm) American flag, which were flown to the moon on the Apollo 11 mission.

The Explorers Club has in its collection more than 200 of its flags, including flags flown at both of Earth's poles, flags carried to the peaks of the highest mountains and flags submerged to the depths of the world's oceans. Some of these flags are displayed on the walls of the Club's New York headquarters, including a second example of an Explorers Club flag that was returned from the moon by the Apollo 11 crew.

Minutes from a September 1969 meeting of The Explorers Club's executive committee record that Armstrong and his two crewmates, Buzz Aldrin and Michael Collins, were interested in becoming members of the club. All three subsequently did join, as did their fellow Apollo moon voyagers.

In addition to the two Apollo 11 moon-flown flags, The Explorers Club was also represented by flags flown on Apollo 8, the first mission to fly humans to the moon and into lunar orbit; Apollo 13; and Apollo 15, the first of three moon landing missions that had a lunar roving vehicle, enabling the astronauts to venture further out across the lunar surface.

The Explorers Club's annual dinner in March commemorated the 50th anniversary of Apollo 11 and celebrated its members who had flown to the moon. Eight of the 12 surviving lunar voyagers attended the gala event, including Aldrin and Collins (Armstrong died in 2012 at the age of 82).

As part of the festivities, The Explorers Club dedicated an area in its headquarters as the "Apollo Room," where it intends to display the Apollo 11 flag being donated by Armstrong's sons, as well as the other banners that traveled to the moon.

Heritage Auctions has a third Armstrong Family Collection sale scheduled for July 16, coinciding with the 50th anniversary of the launch of the Apollo 11 mission.