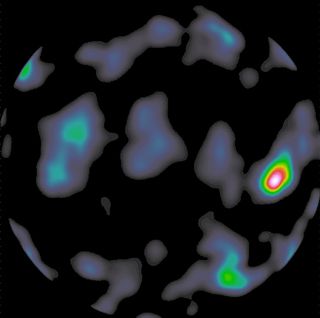 In this image of the globe taken from the International Space Station in 2018, a red-white burst of gamma- rays explodes out of a large thundercloud in Borneo. This is the first-ever image of the fleeting phenomena known as terrestrial gamma-ray bursts.
(Image: © University of Valencia)

Gamma-rays are the highest-energy form of light in the universe. They burst out of distant galaxies following some of space's most extreme events — massive suns exploding, hyper-dense neutron stars crashing into one another, black holes gobbling up worlds of matter, etc. — and, when they do, their glow briefly outshines every other light in the sky. (That is, if you can catch them with a gamma-ray telescope.)

Sometimes, however, gamma-ray bursts pop up where scientists don't expect to see them — like in Earth's atmosphere, for example. These so-called terrestrial gamma-ray flashes are produced by near-light-speed electron interactions inside giant thunderclouds, but scientists aren't exactly sure how they happen. Lasting only about 1 millisecond long, the mysterious bursts of energy are difficult to pinpoint and study in detail.

Now, after one year of observing Earth from space, researchers have created the first-ever image of a terrestrial gamma-ray flash, which erupted out of a thunderstorm over the island of Borneo, in Southeast Asia, on June 18, 2018. As seen above, the colorful cigarette burn of red-white light on the far right of the image shows the burst's most energetic region.

Astronomers observed the storm from a special observatory aboard the International Space Station, which launched in April 2018 with the purpose of monitoring the entire visible face of Earth for terrestrial gamma-ray activity. Hopefully, this is just the first of many such images. After one year of operations, the observatory has captured more than 200 terrestrial gamma-ray flashes, and was able to pinpoint the exact geographic location of about 30 of them, according to a statement from the European Space Agency (ESA).

When researchers know the precise location of a given gamma-ray burst, according to the statement, they can compare their data with other satellites and even local weather stations to paint a better picture of the forces that coalesce to create the fleeting flash of energy.