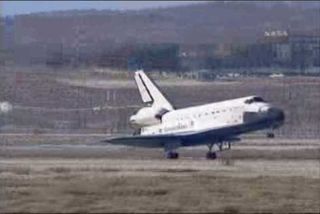 The Space Shuttle Endeavour lands at Edwards Air Force Base in California on Nov. 30, 2008. It's parachute is just being deployed (far left) and the nose wheel has yet to touch down. The landing was safe and successful.
(Image: © NASA TV)

The Space Shuttle Endeavour's piggy-back ride from California to Florida on a modified Boeing 747 has been delayed until at least Tuesday dueto weather, NASA announced today.

The flight had been tentatively slated for Sunday and thenagain for Monday.

For the flight, the shuttlewill be mounted on the back of the 747 to get it from NASA's Dryden Flight Research Center in California to NASA's Kennedy Space Center in Florida. Shuttle programmanagers are watching weather conditions in the Southwest and on the route to Florida.

The shuttle landed atEdwards Air Force Base Nov. 30 after bad weather in Florida forced adiversion to the California back-up location. Now NASA must ferry Endeavourback to the KennedySpace Center.

The flight will cost about $1.8 million. The effort is notexpected to have an impact on NASA's scheduled shuttle flights during 2009,including a planned May mission to workon the Hubble Space Telescope.

The 16-day shuttlemission to the International Space Station upgraded and serviced theorbiting outpost.

The mission, which came during the 10th anniversary of thespace station, included the 200th U.S. spacewalk. Astronauts added two newsleep stations to the ISS, a new galley with a refrigerator, and a water andurine recycling system and an advanced resistive exercise device.

Another update on the weather situation is expected to beannounced this afternoon.