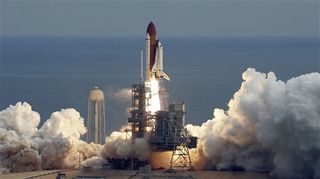 CAPECANAVERAL, Fla. - The successful Tuesday launch of NASA?s shuttle Discovery hasopened the gate for a busy few months of construction at the InternationalSpace Station (ISS).

Discoveryand its seven-astronaut crew launchedinto space at 11:38 a.m. EDT (1538 GMT) from NASA?s Kennedy Space Centerhere to deliver the Harmony connecting node that will anchor futurelaboratories to the ISS.

?This is agreat start to a very challenging mission in front of us,? said NASA?s spaceoperations chief Bill Gerstenmaier said after liftoff. ?I can?t think of abetter start to this mission than what we got today.?

The shuttle?sSTS-120 crew, commanded by veteran spaceflyer Pamela Melroy, will installHarmony, ferry a new station crewmember to the ISS and move a massive solarpower segment during a complicated 14-dayspaceflight.

Once the missionis complete, the space station?s Expedition 16 crew will begin a three-week workmarathon to outfit Harmony with a shuttle docking port and move the module tothe front of the ISS so NASA?s shuttle Atlantis can dock in December to deliverEurope?s Columbus laboratory. No less than 10 spacewalks by shuttle and ISSastronauts are planned before the end of the year.

?Am I worried?No, we?ll do fine,? said Gerstenmaier, adding that there is more a sense ofanticipation, rather than relief, that a new stage of ISS construction is underway. ?Is it exciting? Yes, [and] that?s okay.?

NASA launchdirector Mike Leinbach told reporters that Discovery?s liftoff marked the firsttime since the agency resumedshuttle flights in 2005 that it launched an orbiter on time for the thirdtime in a row. The shuttles Atlantis and Endeavour, which launched in June andAugust, respectively, also lifted off on their first attempts.

Gerstenmaiersaid the agency is now turning its attention to imagery and video taken ofDiscovery during liftoff to determine the health of the spacecraft?sheat shield.

Apreliminary review found six separate instances of foam debris popping freefrom Discovery?s fuel tank during flight, but none of them occurred earlyenough to cause significant damage to the orbiter, Gerstenmaier said. ?

AboardDiscovery, STS-120 mission specialist Scott Parazynski reported what he deemed ?novisible loss of big pieces of foam? after photographing the shuttle?s discardedfuel tank as it floated away.

?It?spreliminary only, but it looks like a clean ascent,? astronaut Terry Virts toldDiscovery?s STS-120 crew from NASA?s Mission Control in Houston, Texas.

Much of asmall patch of ice on a liquid hydrogen pipe running between the aft end ofDiscovery and its external tank before launch appeared to shake off duringliftoff as expected, mission managers said. The ice was attached to a baggymaterial, allowing the ice to fall off on the launch pad where it posed no riskto the shuttle, Leinbach added.

A detailedinspection of Discovery?s wing-mounted reinforced carbon-carbon (RCC) panels,which experience the most extreme temperatures during landing, will beconducted by the STS-120 astronauts on Wednesday. The astronauts will scan eachwing a bit slower than usual with a sensor-tipped extension of Discovery?srobotic arm to look for any hints of defects in the exterior coating of theirheat-resistant panels.

Gerstenmaierstressed after today?s successful launch that the decision to fly was not arush to judgment.

?We?re notin any shape or form playing fast and loose,? Gerstenmaier said. ?We?re goingabove and beyond to make sure we are safe to go fly.?