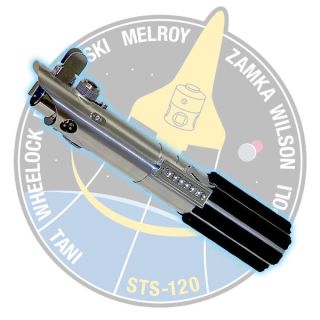 The original lightsaber used by Luke Skywalker in the film 'Star Wars' will fly to the real space station on shuttle Discovery's STS-120 mission in October.
(Image: © Master Replicas/NASA.)

When thespace shuttle Discovery launches the STS-120 astronaut crew in October, theforce will be with them.

Stowedon-board the orbiter, in addition to a new module for the International SpaceStation, will be the original prop lightsaber used by actor Mark Hamill as LukeSkywalker in the 1977 film "StarWars". The laser-like Jedi weapon is being flown to the orbitingoutpost and back in honor of the 30thanniversary of director George Lucas' franchise.

Before itcan make its trip to orbit though, thelightsaber will first fly to Houston, Texas, home of NASA's Johnson SpaceCenter, by way of Southwest Airlines and a Star Wars-studded send off fromOakland International Airport in California on Tuesday.

Chewbacca,the towering Wookiee best known from the film as Han Solo's co-pilot on theMillennium Falcon, will officially hand the lightsaber over to officials fromSpace Center Houston during a ceremony at the airport. Joining"Chewie" will be other characters from the six-part sci-fi classic,including Boba and Jango Fett and together they help push back the airplane onthe tarmac.

Once on theground in Houston, the flight will be greeted by a troop of Stormtroopers andother Star Wars notables including the droidR2-D2, who will deliver the lightsaber to a waiting line of Hummers outsidethe baggage claim of the William P. Hobby Airport. Accompanied by a policeescort, the soon-to-be real space artifact will be driven to Space CenterHouston to be exhibited inside a vault that currently displays moon rocks.

SpaceCenter Houston, as the official visitor center for NASA's Johnson Space Center,plans to publicly display the lightsaber through Labor Day, after which it willbe prepared for its launch from the Kennedy Space Center in Florida.

The lightsaberis scheduled to depart California at 10:40 a.m. PDT and arrive in Texas at 4:20p.m. CDT according to a release jointly issued Monday by Southwest Airlines,Space Center Houston and Lucasfilm.

Return tocollectSPACE on Tuesday, August 28 for pictures from the Houston arrival of thelightsaber and its delivery to the space center.