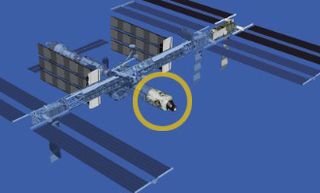 Computer-generated artist's rendering of the International Space Station after the Harmony connecting node (circled in yellow) is relocated from the Unity node port side to the forward port of the Destiny Laboratory.
(Image: © NASA.)

A new hub-likemodule bound for the InternationalSpace Station (ISS) has a new name, Harmony, following a nationwide studentcompetition held by NASA, the space agency announced Thursday.

Formerlyknown by the simple title Node 2, the Harmony module [image]is due to launch towards the ISS in late August to serve as the attachmentpoint for new European and Japanese laboratories. NASA announced the new name duringa ceremony at the agency's Kennedy Space Center spaceport in Cape Canaveral,Florida.

"Thismodule will allow all international partner pieces of the station to connecttogether, so it's really wonderful that kids recognize that harmony isnecessary for space cooperation," said Bill Gerstenmaier, NASA's associateadministrator for space operations, in a statement.

NASA's STS-120astronaut crew, commanded by veteranspaceflyer Pam Melroy, is expected to haul Harmony to the ISS aboard the space shuttle Atlantis no earlierthan Aug. 26. The mission is one of up to five planned NASAshuttle flights dedicated to ISS construction this year.

More than2,200 students in 32 states, ranging in grade from kindergarten to high school,competed in NASA'sNode 2 Challenge, which called on entrants to learn about the ISS, supply acandidate name, write an essay on the suggestion, and build a scale model ofthe new module [image1, image2].

But onlysix different classes ranging from Grades 3 to 9 suggested the name Harmony,NASA said, adding that Node 2 is the first U.S. piece of the ISS to be named bysomeone outside the space agency.

"We decidedthat the name for Node 2 should be Harmony because it also stands for thepeaceful bond and support between all the countries in the world," the 9thGrade class at Lubbock High School in Lubbock, Texas wrote in its essay. "Withthis in mind, we hope that one day everyone can join hands, and cooperate toimprove our society and develop space exploration, experimentation andresearch."

A NASApanel of spaceflight managers, researchers, engineers and educators chose Harmony"because the name symbolizes the spirit of international cooperation embodiedby the space station, well as the specific roleplayed by the module in tying together the international partner modules," thespace agency said.

WhileHarmony is the first U.S. piece of ISS to be named by someone outside NASA, it isnot the first time the agency has held a competition to name a space-boundvehicle. NASA held a nationwide competition to name the spaceshuttle Endeavour. The orbiter's name was announced in May 1989 by then-PresidentGeorge H.W. Bush.