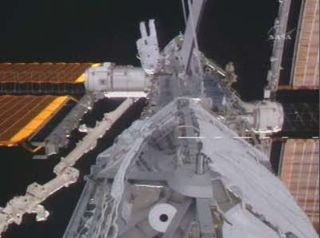 "That is beautiful," Curbeam said as the P5 spacer moved into place.

Tuesday's spacewalk began at 3:31p.m. EST (2031 GMT) with Beamer and Fuglesangstepping out of the space station's Questairlock as the outpost and their docked shuttle Discovery passed 220miles (354 kilometers) over central Europe.

"It feels good, let me tell you," Curbeam said just after stepping into space to start thefourth spacewalk of his astronaut career.

About the only hitch was a lostextension for Fuglesang's pistol grip tool, whichapparently slipped free of its mooring on his spacesuit work bench.

"I was looking around, I didn't seeit," Fuglesang told flight controllers. "But, ofcourse, it's dark here."

During the spacewalk, missioncontrollers told Polansky that a focusedinspection of Discovery's heat shield will not be required Wednesday tohelp engineers determine the spacecraft's health.

The P5 truss adds another4,110-pound (1,864-kilogram) to the more than 200-ton space station and setsthe stage for the future relocation of the Port 6 truss.

Maneuvering P5 into position at theend of the Port 3/Port4 (P3/P4) truss segment appeared to be trickybut flawless, with Curbeam and Fugelsang giving verbal updates of where Higginbotham andWilliams should move the new space station piece. At times the truss segmentwas within inches of a sensitive electronics box.

The P5 segment will serve as astructural bridge between two massive trusses whose solar arrays make up partof the space station's power plant. Without the new P5 element, the olderarray-laden Port6 truss atop the ISS would be unable to move to its permanent berth on thestation's port side near two newersolar wings on the P3/P4 segment.

Curbeam and Fuglesangeven managed to perform a series of extra P5-related jobs, included wiring upseveral utility connections and releasing launch locks on the truss' empty endto prepare for the future arrival of the P6 solar arrays.

Among the other chores on Curbeam and Fuglesang's orbitalto-do list were the relocation of a robotic armgrapple fixture, as well as the repair of a video camera at the opposite end ofthe space station's main truss.

Curbeam also had some trouble removing thefaulty camera, which had to be pointing straight upward to unlatch its locks.

"Ok, no go on the wiggle," theyreplied.

After some troubleshooting, Curbeam and Fuglesangsuccessfully installed the camera, completing their primary spacewalk goals.

Tuesday's spacewalk marked the 46thspacewalk based from the ISS and the 84th dedicated to stationassembly and maintenance, NASA officials said. It is the first of three plannedEVAs for the STS-116mission.