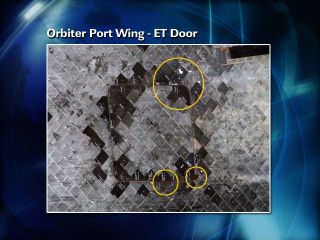 HOUSTON - After successfullydocking with the InternationalSpace Station (ISS), the Discovery astronauts interrupted their scheduledtasks to perform a brief inspection of heat shield panels on the shuttle's leftwing leading edge.

Theunscheduled inspection was prompted by the detection of a very minor impact onthe shuttle wing early this morning and was a precautionary step done in orderto avoid a time-consuming focused inspection on the fifth day of an alreadybusy flight.

Sensors onthe wing designed to detect vibrations from impacts reported the ding at about5:30 a.m. EST (1030 GMT) this morning, while the seven STS-116 astronauts werestill asleep.

"The teamhas looked and gone through and done their first pass on all of the wingleading-edge RCCs and the nose cap and has identified no issues," Shannon said. "It is a very rigorous process."

He addedthat the impact detected by the wing sensors was only about 0.12 gravity rootmean square (GRMS), about 1/100th of what would normally generate concern.It takes about a 10 GRMS impact to create a scuff on a heat shield tile, and a20 GRMS collision to make a crack or hole.

Images shotby ISS crewmembers during Discovery's rotationalpitch maneuver (RPM) before docking--during which the orbiter performs a360-backflip--also revealed minorscuffs and discoloration on some of the tiles, particularly around the externaltank (ET) umbilical cord doors on Discovery's port wing, but these are notexpected to be of concern either, Shannon said.

Led bySTS-116 commander MarkPolansky, the STS-116 crew will participate in three spacewalks over thenext week to install a new $11 million Port 5(P5) spacer segment to the ISS, switch on a thermal cooling system andrewire the orbital laboratory's electrical grid so it can draw power from a newset of solarpanels arrays installed last month.