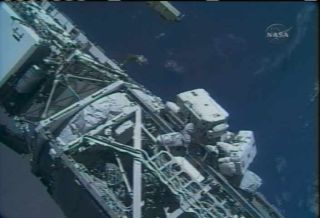 HOUSTON - Two spacewalking astronauts freeda new piece of the InternationalSpace Station (ISS) to rotate independently from the rest of the 233-tonorbital laboratory, paving the way for the deployment of two solar arrays thisweek.

Despite a broken socket, stickybolts and another runaway bit of metal, STS-115 mission specialists DanielBurbank and StevenMacLean successfully removed a series of locks and restraints from a pivotpoint between the space station's newly delivered Port 3(P3) and Port 4 (P4) truss segments.

"This is more of an endurance kindof thing," Burbanksaid as he and MacLean grunted and struggled to remove one particularlystubborn bolt with a bit of extraelbow grease during their seven-hour and 11-minute spacewalk. "That would be a showstopper for rotationand deploy."

"You guysdidn't spend enough time at the gym," Tanner told the spacewalkers from insidetheir Atlantis shuttle, calling their work an amazing effort. "You wouldn't imagine the drama inside here and, I'm sure, on the ground right now."

The orbital construction job freed a10-foot (three-meter) wide, motorized gear mechanism known as the SolarAlpha Rotary Joint (SARJ) - to rotate the outboard P4 truss a full 360degrees so its solar arrays can track the Sun once deployed and activated.

The 2,500-pound (1,133-kilogram)SARJ assembly must rotate the P4 truss at least 180 degrees from its currentposition before the two expansive solar arrays can unfurl Thursday to avoidinterfering with a set of olderU.S.-built solar wings spread about 90 feet (27 meters) above the P4truss.

Mission controllers plan to put the SARJthrough a 12-hour checkout that included the 180 degree turn, then the entire test revolution. Atlantis astronauts confirmed that the device was infact rotating the P4 truss by 1:03 p.m. EDT (1703 GMT).

MacLean did lose another small bolt,similar to one that escaped their fellow STS-115 spacewalker JosephTanner on Tuesday, when the retaining washer latching it to a thermal coverapparently failed.

"I did not see it go," MacLean toldmission controllers, though flight controllers were not concerned that the lostbolt posed a threat to the SARJ assembly, ISS or shuttle. "When I removed thecover, the four bolts were on it."

A small pin also popped free from Burbank's trash bag nearthe end of the spacewalk, but the spacewalker reached out and grabbed it beforeit could escape.

While Burbank and MacLean areboth veteran shuttle astronauts, they each made their spacewalk debut today at5:05 a.m. EDT (0905 GMT).

"Boy that ispretty," Burbanksaid of the Earth after stepping into space. "It's not something you see everyday."

They had atedious, but crucial, job ahead of them: the removal of 14 launch locks and sixrestraints that held fast the SARJ assembly during Atlantis' Sept.

It wasrepetitive work. Each launch lock required the astronauts to unscrew up to sixbolts and remove a thermal cover, remove four more bolts to unlock themechanism, and then replace the cover and secure its own screws.

The launchrestraints too required more bolt work, which was so grueling at one point thatboth men strained together to pry a single stubborn bolt from its lock point.

One ofMacLean's tools even broke while trying to loosen one of the bolts.

"They're goingto take it out of my wages, you know," MacLean said.

"We appreciateyou answering that age-old question for MCC, how many astronauts does it taketo unscrew a bolt," said NASA astronaut Pam Melroy, serving as ISS spacecraft communicator, frommission control here at Johnson Space Center."Apparently it takes three, two outside and one inside."

MacLean, a Canadian Space Agencyastronaut, is only the second Canadian ever to walk in space after his fellowcountryman ChrisHadfield helped deliver the space station's Canadarm2robotic arm in April 2001.

"It was an absolutely wonderfulexperience," MacLean said.