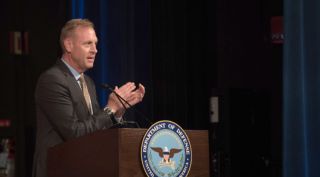 WASHINGTON — Military space programs that are just getting off the ground and are targets for use of commercial technologies might end up in the portfolio of a new DoD agency that could be up and running in early 2019.

The Space Development Agency is a high priority of Deputy Defense Secretary Patrick Shanahan and Undersecretary of Defense for Research and Engineering Michael Griffin. Both have been critical of the sluggish pace of innovation in military space programs and have argued that a brand new agency, untethered from the traditional procurement process, is the answer.

Shanahan unveiled a proposal in August that lists the Space Development Agency as one of several reorganization efforts that are part of a broader plan to form a new military branch for space. Both Shanahan and Griffin see the SDA as an urgent need that should not wait until Congress decides whether to establish a Space Force. Griffin has recommended the new agency be placed temporarily under his R&E portfolio. Shanahan told reporters last month that he wants the SDA stood up in the first quarter of calendar year 2019.

The plan has drawn criticism and stirred questions about why DoD is creating a new agency to do what existing space procurement organizations already do in the Air Force, the Army, the Navy and the intelligence community.

Budget analyst Todd Harrison, of the Center for Strategic and International Studies, said he did not include the Space Development Agency in his latest cost estimates for a Space Force because it was not clear to him what this agency will be doing.

A spokesman for Shanahan said specific details are forthcoming. "The role for the Space development Agency has not been finalized," the spokesman said in a statement to SpaceNews. "The intent is to ensure DoD leverages commercial space technology and accelerates the development and delivery of new capabilities. Final decisions on the SDA are expected in coming weeks, but early 2019 is still the plan."

According to industry and DoD sources, Shanahan has asked Griffin to scope out space programs that could be taken over by the SDA. The new agency would have a relatively small portfolio of programs to start out. That study is to be completed by early 2019.

One industry source said Griffin is eyeing several programs to potentially move to the SDA, including Blackjack — an effort now led by the Defense Advanced Research Projects Agency to demonstrate military capabilities in low earth orbit — and a constellation of missile warning sensors, known as Space Sensor Layer, that the Missile Defense Agency is now overseeing. Another industry source said Griffin has been frustrated by the slow pace of MDA studies on the Space Sensor Layer and would consider moving the program to the SDA.

The director of the Missile Defense Agency, Air Force Lt. Gen. Samuel Greaves, told SpaceNews in a statement that the agency is working with nine industry teams to "explore low earth orbit architectures, spacecraft and payload concepts." Greaves said decisions on how this program moves forward will be made by Griffin in addition to "multiple stakeholders."

The organization that could be the most impacted by the Space Development Agency is the Air Force Space and Missile Systems Center that oversees $7 billion in programs. Air Force Secretary Heather Wilson said SMC has been reorganized to speed up acquisitions, exploit commercial technologies and pursue other efforts that sound similar to what the SDA would do. One of the changes, for example, was to split up responsibilities held by the commander of SMC, Lt. Gen. John Thomson, into three jobs: A program executive officer, or PEO, for space development; a PEO for space production and a PEO for space enterprise.

Wilson said it would be premature to comment on whether the PEO for space development would overlap with the new Space Development Agency. "It is still to be determined what this concept develops into," Wilson said in an interview on Monday.

Harrison said the decision to stand up a new agency is the product of longtime frustration "that our current acquisition offices aren't just buying the right things and not buying fast enough."

That might be the case, but it appears that DoD is rushing to create an organization before it knows what it will do, warned Andrew Hunter, director of the CSIS Defense-Industrial Initiatives Group. "Who is actually the customer of the SDA?" he asked. "And the name is kind of interesting. If the idea is that we're going to leverage commercial technology, then it's an acquisition not a development agency. We're letting other people develop technology and we acquire it," Hunter added. "What I hear is a lot of confusion about what the mission of this organization is."

Perhaps first "we settle on what the Space Force is going to be, what its structure is going to be," he said. "In my ideal world we wouldn't start a SDA until we know the answer on Space Force. Once we know that, then I would know what kind of development or acquisition solution we need to deliver to that force to enable it. But of course we're doing the exact opposite, because institutionally we have the authority within the department to do the SDA but not the Space Force, which requires an act of Congress. So we are putting the cart before the horse."