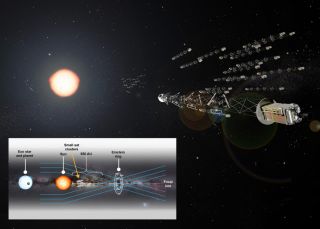 Artist's illustration of a swarm of spacecraft flying out of the solar system at a velocity of over 75 miles per second to reach the solar gravity line, where they could view focused light from an exoplanet.
(Image: © The Aerospace Corporation)

An innovative deep-space concept that relies on a solar gravity lens (SGL) to enable enhanced viewing of exoplanets is under study by researchers at NASA’s Jet Propulsion Laboratory (JPL) and The Aerospace Corporation.

The SGL would provide 100-billion-fold optical magnification, allowing it to show details as small as 6 miles (10 kilometers) across — similar to being able to spot something the size of New York City on an exoplanet, study team members said.

As detailed in a press statement from The Aerospace Corporation, according to Einstein’s theory of relativity, light traveling through space will bend if it passes near sufficiently massive objects. This means that distant light will bend around the periphery of the sun, eventually converging toward a focal region as if it had passed through a lens. [13 Ways to Hunt Intelligent Aliens]

The SGL mission concept would send a swarm of spacecraft to that region to view the focused light.

"SGL requires placement of an array of detectors that starts to observe the light from exoplanets once they arrive at a distance of approximately 50 billion miles or 550 astronomical units [AU] away from Earth," said Tom Heinsheimer, Aerospace’s technical co-lead for SGL. (One AU is the Earth-sun distance — about 93 million miles, or 150 million km.)

"To get to that solar gravity line," Heinsheimer said, "the swarm of spacecraft will need to use a solar sail to fly out of the solar system at a velocity of over 75 miles per second."

Navigation and propulsion technologies will need to keep the sensors on the spacecraft flying in the 1-mile-wide (1.6 km) line that contains the light from the exoplanet. The roundtrip communications link of 6 light-days will make ground control of the spacecraft impractical, so the spacecraft will need to be adaptable and able to learn from experience.

To undertake the two-year SGL study, Aerospace was awarded $130,000 via a Phase II award from the NASA Innovative Advanced Concepts (NIAC) program through a contract with JPL, which leads the overall NIAC study.

You can learn more about the SGL idea — which remains an early-stage concept, far from an official mission — via NASA's NIAC site.