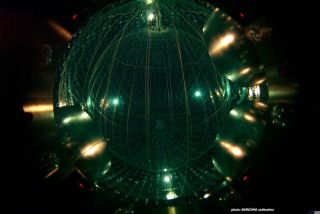 The Borexino instrument is nestled deep beneath Italy's Appenine mountains. Flashes of light within its massive detector reveal when neutrinos bang into electrons. By painstakingly compiling data on these neutrino-electron collisions over 10 years, scientists have created one of the most detailed snapshots yet of the sun's fiery heart.
(Image: © Borexino)

Why does the sun shine?

Our local star constantly smashes atoms together deep inside its fiery belly to produce its blazing light. But because this internal commotion lies hidden beneath the sun's thick outer layers, scientists have few ways to learn about what goes on at the star's core.

But by collecting neutrinos — tiny, ghostly particles that barely interact with other matter and so can fly directly out from the sun’s center— researchers have produced one of the most detailed snapshots ever compiled of the sun's mysterious interior.

"We're basically staring at the sun in the heart," study co-author Andrea Pocar, a physicist at the University of Massachusetts Amherst, told Live Science. The results, which appeared today (Oct. 24) in the journal Nature, will help solar physicists gain a better understanding of our parent star. [Sun Storms: Incredible Photos of Solar Flares]

Researchers created the snapshot using a colossal detector situated at the center of the international Borexino experiment, which sits inside a mountain range in Italy to help shield it from interfering radiation. Every second, 420 billion neutrinos from the sun hit any given postage-stamp-size area of the Earth's surface. However, most of these neutrinos pass through the planet like light rays through a clear window, according to a statement from the collaboration.

Borexino takes advantage of the fact that every once in a while, a neutrino has some chance of interacting with an electron. The project's detector consists of 100 tons of an ultrapure substance that produces a tiny flash of light if a neutrino hits one of the instrument's electrons, Pocar said. Surrounding the detector are 2,000 supersensitive cameras that can record the intensity of the light flashes, revealing how much energy the neutrino carried when it smacked into the electron, he added.

While most previous solar-neutrino experiments could detect only high-energy neutrinos, Borexino can detect neutrinos with a vast range of energies, providing a better look into the nuclear reactions in the sun's interior, the researchers said. The experiment collected data for 10 years to provide the new, highly precise picture of neutrinos emerging from the sun.

Neutrinos serve as excellent probes of the sun's interior, because the nearly intangible particles stream directly out from the core at the speed of light, Pocar said. Photons, or light particles, by contrast, get quickly absorbed and then re-emitted by atoms in the dense solar center. This sends the particles on a zigzagging path out of sun's center that can take thousands of years, said Pocar.

Borexino's results will provide valuable data for scientists making models of the sun. The snapshot could, for instance, help determine the precise amounts of relatively heavy elements — such as carbon, nitrogen and oxygen — in the sun's center, said Pocar, a problem that still leaves solar physicists scratching their heads.