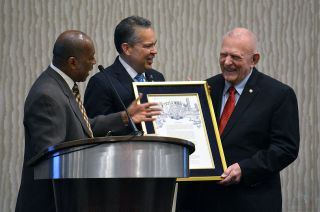 HOUSTON — A NASA legend who led the team that landed humans on the moon almost 50 years ago was saluted in Houston on Tuesday (Oct. 23) for his current role preserving the historic site where the Apollo 11 mission was managed.

Houston Mayor Sylvester Turner proclaimed Oct. 23, 2018 "Gene Kranz Day," honoring the Apollo flight director at an event organized by Space Center Houston. The "To the Moon and Beyond" luncheon was also a benefit, raising $300,000 for the restoration of the Mission Operations Control Room at NASA's Johnson Space Center where Kranz defined the principles of Mission Control.

"As a native Houstonian, this is a very proud moment," said Turner, addressing Kranz in front of a room of 400 NASA managers, elected officials and business leaders at the Marriott Marquis in downtown Houston. "You really have put not just the city of Houston, but Webster, Friendswood, and the whole area on the map."

Kranz served as a flight director for NASA's Gemini and Apollo programs. He was at the head of Mission Control when Apollo 11 astronauts Neil Armstrong and Buzz Aldrin touched down on the lunar surface on July 20, 1969, but he is perhaps best known for his role in saving a stranded moon-bound crew in April 1970, as portrayed by Ed Harris in the 1995 movie "Apollo 13."

"Gene, we salute you for making the terms 'discipline, morale, toughness and competence' the core values of the work in Mission Control," said astronaut Serena Auñón-Chancellor in a video recorded on the International Space Station. "Your legacy will enable us to continue the journey back to the moon and beyond."

In recent years, Kranz has spearheaded the effort to return his former workplace —Â NASA's historic Mission Operations Control Room — to how it looked at the time of the first moon landing. Space Center Houston, as the official visitor center for Johnson Space Center, has led the campaign to raise the $5 million needed to complete the restoration in time for the 50th anniversary of the Apollo 11 mission in July 2019.

"Today is really monumental because we have been working to raise funds, a $5 million campaign, to restore the historic mission control room and we are getting closer to that goal," said William Harris, president and CEO of Space Center Houston. "All of the proceeds from today's luncheon are going to towards those efforts."

The city of Webster, a suburb of Houston, provided the lead gift of $3.5 million in 2017. A successful Kickstarter campaign raised an additional $500,000.

"We're restoring Mission Control to the 1960s," said Harris, "so it will be as if all of the flight controllers got up and took a break. You're going to be able to experience what it was like during the historic Apollo missions."

Three Apollo astronauts attended Tuesday's event, including Walt Cunningham who flew on Apollo 7 50 years ago this month and Charlie Duke who walked on the moon on Apollo 16 in 1972.

"I would be remiss if I did not give recognition to two special donors who are here today, Apollo 8 astronaut and Major General Bill Anders and his wife, Valerie," said Gwen Griffin, event chair and the daughter of Apollo flight director Gerry Griffin. "When Bill received the invitation to today's luncheon he wanted to outdo the rest of us, so he created his own level of support.

"He [Anders] named that level 'Go for TLI,' which those in the space business know stands for Trans-Lunar Injection. Apollo 8, Bill's flight, marked the first time that we sent a crew to the moon and we were 'go for TLI,'" said Griffin.

The luncheon kicked off Space Center Houston's countdown to the Apollo 11 50th anniversary next year. The nonprofit educational center is planning activities to lead up to July 2019, when a month-long "Defying Gravity" celebration will be held, including a ribbon-cutting for the restored Mission Control room.

"It was really a great opportunity to work in Mission Control," said Kranz, standing alongside fellow flight directors Griffin and Milt Windler. "We thank the members of the Flight Support Division who are restoring Mission Control and we thank Space Center Houston for their efforts in raising the funds to restore it."