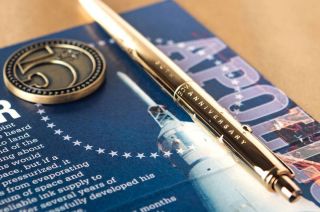 Fifty years ago, Walt Cunningham became one of NASA's first Apollo astronauts to fly into space and, aboard the same mission, one of the first people to use a Space Pen.

Cunningham, together with his Apollo 7 crewmates Wally Schirra and Donn Eisele, spent 11 days in Earth orbit checking out the Apollo command and service module systems. Launched atop a Saturn IB rocket on Oct. 11, 1968, the three astronauts confirmed that the spacecraft was ready to support subsequent crews on flights to the moon and back.

They also verified that a pen equipped with a pressurized ink cartridge was suited for writing in microgravity. [Apollo's First Crewed Trip to Space Happened 50 Years Ago]

"Fifty years ago, I flew with the first flown Space Pen on Apollo 7. I relied on it then, and it's still the only pen I rely on here on Earth," states Cunningham as reproduced on a small plaque that accompanies a new commemorative edition of the original pen.

Fisher Space Pen Company has launched the "Apollo 7 50th Anniversary Gold Titanium Astronaut Space Pen" in celebration of the first Apollo crewed mission and the first use of its writing instrument in space.

"We are extremely proud to be celebrating 50 years in space," said Cary Fisher, the president of Fisher Space Pen. "My father Paul Fisher was a visionary who personified American entrepreneurship and innovation. Our products are sold all over the world but we are still a family business manufacturing high-quality, state-of-the-art writing instruments, proudly made in the USA."

Contrary to an urban legend that NASA spent multiple years and millions of dollars developing a pen for its astronauts to use (while Soviet cosmonauts simply used pencils), the Space Pen began as the idea of Paul Fisher, an established ballpoint pen manufacturer, who invested his own $1 million into its invention. Foregoing the need for gravity to pull the ink down, Fisher's 1965 Anti-Gravity 7 (AG-7) pen used a pressurized cartridge and gel-like ink such that it continued to work when holding the pen upside down, in extreme temperatures and even underwater.

And, as it turned out it, in space.

Realizing his pen might be a good fit for astronauts, Fisher sent samples of the AG-7 to NASA, where it was put through and passed a series of tests. The Space Pen made its on-orbit debut aboard Apollo 7. A year later it was adopted by the Russian space program, too. For five decades, Space Pens has been on board every human spaceflight mission.

The Apollo 7 50th Anniversary Gold Titanium Astronaut Space Pen reproduces the AG-7 model in brass with gold titanium nitride plating. The barrel is engraved with a depiction of the Apollo 7 spacecraft flying through a star field. Each pen is individually numbered and is inscribed "APOLLO 7 Anniversary" and "First Apollo Crew | Oct. 11-22, 1968."

Limited to only 500 pieces, the pen comes in a clear black lacquer gift box with a commemorative medallion featuring the Apollo 7 spacecraft on one side and the Fisher Space Pen "50" logo on the other. The set is packaged in a gold cardboard outer box and black velour string-tie bag.

In addition to being the maiden flight of the Space Pen and first crewed mission of NASA's Apollo moon landing program, Apollo 7 was also the first three-person U.S. spaceflight and the first mission to include a live television broadcast from an American spacecraft.