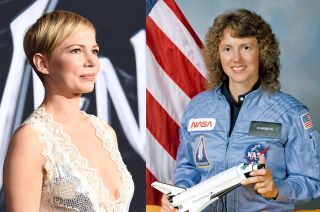 The true-life tragic story of NASA's first teacher-in-space is the focus of a new feature film now in development.

Actress Michelle Williams is set to portray Christa McAuliffe, the high school teacher who with her six astronaut crewmates were lost aboard the space shuttle Challenger in 1986. Williams was nominated for an Academy Award for her performance in the 2005 movie "Brokeback Mountain" and is now co-starring in the comic book film "Venom" opening in theaters on Friday (Oct. 5).

"The Challenger," to be directed by Martin Zandvliet ("Land of Mine"), follows McAuliffe on "the incredible journey she took from her classroom to becoming a member of the space shuttle Challenger crew," describes Argent Pictures.

McAuliffe was teaching social studies classes in Concord, New Hampshire when she was selected through a nationwide search to be the first teacher to launch to space. She and her STS-51L crewmates were tragically killed when a faulty rocket booster led to the space shuttle Challenger breaking apart 73 seconds into flight on Jan. 28, 1986.

"We are more than humbled and extremely grateful for the opportunity to help tell the story of Christa McAuliffe and the Challenger mission," said Renzo. "The entire Argent team is honored and eager to responsibly capture and share the events and personal journeys of those surrounding this important historical moment with audiences around the world to help remember and further appreciate the sacrifices Christa and rest of the Challenger crew made to further our journey into space."

"The Challenger" will be produced by John and Art Linson ("Sons of Anarchy," "Yellowstone") with Argent Pictures ("Hacksaw Ridge," "American Made"). The screenplay will be penned by Jayson Rothwell. Production is targeted to begin in May 2019, according to Deadline Hollywood. [How the Space Shuttle Challenger Disaster Happened (Infographic)]

In the three decades since the tragedy, McAuliffe and the Challenger accident have been the focus of numerous documentaries, including directors Renee Sotile and MJ Godges' "Christa McAuliffe Reach for the Stars" released in 2006. There were also two made-for-TV movies: ABC's 1990 "Challenger" starring Karen Allen as McAuliffe and the 2013 BBC and Science Channel "The Challenger Disaster" starring William Hurt as physicist Richard Feynman.

Directors Philip Kaufman ("The Right Stuff") and Nathaniel Kahn ("The Price of Everything") were attached to "Challenger," a feature film that would have focused on Feynman's role in the post-accident investigation, before the film was shelved in 2008.

Argent Pictures' synopsis for Zandvliet's "The Challenger" suggests that the film will look beyond the tragedy towards McAuliffe's enduring impact.

"Despite the disaster, her memory and mission left a lasting impression and legacy on her family, community and teachers across the world and continues to inspire others through her willingness to take risks and touch others' lives through her strength and convictions," Argent Pictures describes on its website.