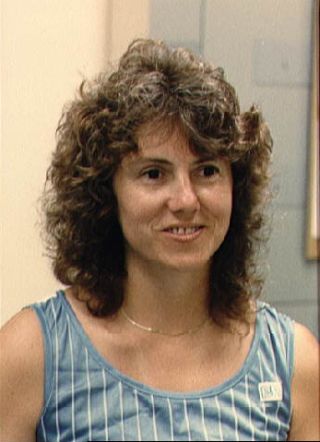 Teacher in Space Participant Christa McAuliffe is seen in an informal pose during training for STS-51L.
(Image: © NASA)

Millions of students were watching when the space shuttle Challenger broke apart just after liftoff on Jan. 28, 1986, killing all seven members of its crew, including America's first teacher astronaut, Christa McAuliffe.

The sudden loss devastated people around the world, but especially those schoolchildren and teachers who had felt a special connection with the mission because of the presence of one of their own. Now, a quarter of a century later, teachers and students will join NASA in commemorating the 25th anniversary of the accident Friday.

"Twenty-five years ago I was a teacher, and I remember: 'This is this moment when a teacher, one of us who will teach kids and inspire, is going to space.' And then to have this terrible thing happen, it was a deep moment for our entire nation," said Dan Barstow, president of the Challenger Center for Space Science Education. "This was a very difficult time to question our capacity, our spirit of exploration, our educational approaches."

Not only was the Challenger accident NASA's first in-flight calamity, it was the first space-related disaster to take place on live television. (NASA had lost three astronauts on the launch pad in 1967 when a fire broke out in their Apollo 1 capsule during a non-televised test.) After two dozen successful shuttle missions had lulled the public into considering the launches routine, viewership for this one was high because of the presence of McAuliffe, NASA's first civilian and teacher to fly.

"Many students were actually watching this on TV," Barstow told SPACE.com. "It was a shock, as with the death of anybody, especially when it's a teacher. That's why it was such a tragic moment for kids especially."

The Challenger Center was founded by the families of the Challenger astronauts to carry on the educational mission of the Challenger STS-51L crew. The center encompasses 48 learning centers around the country that allow kids to learn about space via simulated space missions and other hands-on activities.

"I'm proud of what they're doing," said Barbara Morgan, who was McAuliffe's backup for the Teacher in Space program and 21 years later got to fly on the STS-118 mission of the space shuttle Endeavour. [Challenger Remembered: Q&A with Teacher Astronaut Barbara Morgan]

The Challenger Center, Morgan said, "really provides a wonderful opportunity for our young people to experience the joy of working in a team and exploring and discovering together and engaging in our wonderful world of science technology, engineering and mathematics."

Barstow said the families of the Challenger crew chose not to erect a static monument for their loved ones.

"They had to reach out to the nation's children, students, and design and create some powerful educational experiences that could inspire kids at this moment when they had lost this teacher model," he said. "Now, 25 years later, this is an incredible success story. We reach 400,000 kids every year. It's a wonderful program."

Although McAuliffe, a high school teacher from New Hampshire, never got to complete what she called "the ultimate field trip," she sparked a stronger relationship between NASA and the education community.

NASA canceled the "Teacher in Space" program after McAuliffe's death, but it later began the "Educator Astronaut Project" to train selected teachers to be professional astronauts. When Morgan flew on the space shuttle in 2007, it was under the auspices of this program. Educator astronauts Joseph M. Acaba, Richard R. Arnold and Dorothy Metcalf-Lindenburger followed.

"I remember Challenger," Metcalf-Lindenburger said in a NASA interview before her flight on the STS-131 mission of the shuttle Discovery in April 2010. "I was in sixth grade, and it's one of those moments that you remember where you were and how it impacted you.

"I didn't ever think that we should give up on space exploration, so I was really glad to see that the U.S. continued on."