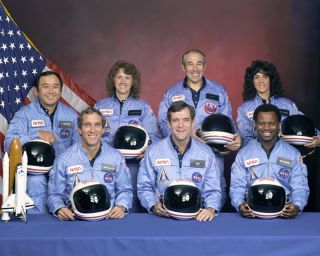 NASA will commemorate three space tragedies this week, which also marks the 25th anniversary of the shuttle Challenger accident that killed seven astronauts. The space agency will also pause to remember the 2003 loss of the shuttle Columbia and its crew and the earlier Apollo 1 fire that killed three astronauts.

"It just always gives us pause at this time of the year, those of us that are in the industry, to reflect on our sad experiences in the past and the lives of those that made such a great contribution to our country," said Wayne Hale, a former space shuttle program manager and flight director who was working at NASA during both space shuttle accidents.

The somber week will begin on Thursday, Jan. 27 – the 44th anniversary of the day three astronauts died when a fire broke out in their Apollo 1 module during a ground test roughly a month before launch. On that day in 1967, Apollo astronauts Virgil I. "Gus" Grissom, Edward H. White II and Roger B. Chaffee perished in what was then NASA's first major tragedy.

While an accident review board never conclusively determined what ignited the fire, a series of design flaws were blamed for making the module so flammable and difficult to quickly escape from. The investigation into the disaster delayed the Apollo program by more than a year-and-a-half and led to redesigns for the Apollo module, as well as procedural changes at NASA.

"We have not forgotten the lessons from Apollo, and I sure hope we as an agency don’t forget these lessons we have learned," said Bill Gerstenmaier, NASA's associate administrator for space operations.

It was almost 20 years before tragedy struck NASA again. This time it was during a launch – the first in-flight calamity the space agency had experienced.

Seven astronauts died when the space shuttle Challenger broke apart 73 seconds after lifting off on the orbiter's 10th flight on Jan. 28, 1986. Among those killed was teacher Christa McAuliffe – NASA's very first educator astronaut. Before being selected for the special educator program, McAuliffe taught social studies at Concord High School in New Hampshire.

"They're both very personal events for us in the agency because it's not just our coworkers, but it's also our friends that perished in these events," Gerstenmaier said of the two shuttle accidents. "I think the mood is a time to reflect back on the things we're doing and think about the way we do things … what things we can learn from both of these events that we can carry forward."

That calamity halted the shuttle program for almost three years while NASA studied what went wrong and worked to get back on track.

The source of the accident was traced to the exceptionally cold weather, which caused a seal called an O-ring on one of the shuttle's twin solid rocket boosters to fail at liftoff.

When hot gas escaped from the solid rocket motor, it damaged the attachment between the booster and the orbiter, eventually causing the adjacent external fuel tank to explode. Ultimately, Challenger disintegrated, and the astronauts were killed when their crew cabin impacted the Atlantic Ocean.

This was also NASA's first disaster to take place on live television.

Millions were watching when astronauts Francis "Dick" Scobee, Ron McNair, Mike Smith, Ellison Onizuka, Judy Resnik, Greg Jarvis and McAuliffe were killed. The presence of McAuliffe – a civilian and a teacher – on the Challenger increased the public interest in the flight.

"The Challenger crew was doing something wonderful for all of us and it has to do with education and opening doors for our young people and all of us for the future," said Barbara Morgan, McAuliffe's backup, who later went on to fly on the shuttle Endeavour in August 2007. "It was devastating."

Later analysis revealed that a bit of foam insulation from Columbia's fuel tank broke off during launch and impacted the orbiter's left wing, causing the vehicle to break up as it flew over Texas.

"I think the real underlying lesson is, our business is not easy," Gerstenmaier told SPACE.com. "The things we do are very unforgiving. Very small, minor details count a lot and you really have to pay attention to those and really work those hard."

He said it was important for the memory of these tragedies to shape the direction of NASA in the future.

"One of the best ways we can honor the sacrifice of our friends is to keep moving forward in the exploration of space," Gerstenmaier said.

NASA plans a series of memorials for the tragedies this year, including a ceremony on Jan. 28 at 9 a.m. EST (1400 GMT) at the agency's Kennedy Space Center Visitor's Complex in Florida, where NASA leaders, astronauts and June Scobee Rodgers, widow of Challenger commander Dick Scobee, will speak. The service will be broadcast live on NASA TV, which is available here: http://www.nasa.gov/ntv

You can follow SPACE.com senior writer Clara Moskowitz on Twitter @ClaraMoskowitz. Return to SPACE.com each day this week for a closer look at the 25th anniversary of the Challenger space shuttle disaster.