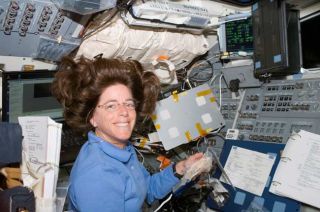 Astronaut Barbara Morgan, an STS-118 mission specialist and former Idaho schoolteacher, smiles for a photo near the aft flight deck of Space Shuttle Endeavour while docked with the International Space Station.
(Image: © NASA.)

Morgan, 56,first joined NASA in 1985 when she was selected as the backup civilian educatorfor the agency?s Teacherin Space program. She left NASA and returned to teaching after theill-fated launch of the space shuttle Challenger, which explodedand broke apart just after liftoff on Jan. 28, 1986 with seven astronautsaboard, including the first Teacher in Space Christa McAuliffe.

But Morganreturned in 1998, when she was selected as NASA?s first professional educatorastronaut. She was named to NASA?s STS-118 shuttle crew in 2002, but her flightwas delayed by a second shuttle tragedy, the 2003 loss of the shuttle Columbiaand its crew of seven astronauts.

Morgan launchedto the International Space Station (ISS) in August 2007, when she and sixcrewmates flew a successful 13-daymission to continue construction on the orbiting laboratory beforereturning home aboard their shuttle Endeavour.

?It isreally tough to leave NASA,? Morgan said in a NASA statement. "It is agreat organization with great people doing great things. We're going back tothe moon and on to Mars.?

Morgan, aformer McCall, Idaho, elementary school teacher, is leaving NASA for a positionas Distinguished Educator in Residence at Boise State University, where she?ll workwith the state of Idaho on science and math education.

?We live ina time when our state needs a strong voice to advocate for the importance ofscience, technology, engineering and math education to benefit our children,our economy, and our nation,? said Boise State President Bob Kustra in astatement. ?As a respected teacher, mission specialist and astronaut, Barbarais uniquely qualified to provide this voice and this leadership.?

?A native ofFresno, Calif., Morgan spent more than 305 hours in space during the STS-118mission. While working in orbit, she wielded robotic arms aboard the shuttleEndeavour and station, as well a spoketo schoolchildren on Earth to describe life in space. She is married andhas two sons, and said before her STS-118 mission that she ultimately hoped toreturn to education after flying in space.

"Barbarahas served NASA and the Astronaut Office with distinction over the course ofher career," said NASA?s chief astronaut Steve Lindsey in a statement."From the Teacher in Space Program to her current position as a fullyqualified astronaut, she has set a superb example and been a consistent rolemodel for both teachers and students. She will be missed."

Morgan isleaving NASA with three remaining educator astronauts in the agency?sspaceflying ranks: mission specialists Richard Arnold, Joseph Acaba and DottieMetcalf-Lindenburger. The teacher-astronauts were recruited in 2004, with Arnoldand Acaba slated to launch in 2009 during NASA?s STS-119 shuttle mission to thespace station.

?I'm especially proud that we have three other teachers whoare astronauts, and there will be others in the future,? Morgan said. ?I'm veryexcited to go to work for Boise State University. I like everything about it,and it's going to be wonderful helping exploration by working full time foreducation."