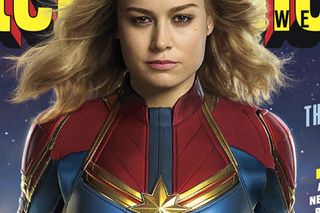 "Captain Marvel" won't be an origin story, according to Entertainment Weekly.

Instead, per co-directors Ryan Fleck and Anna Boden, the story will kick off in the 1990s with Carol Danvers already in possession of her powers and fighting alongside a Kree military organization called Starforce. And the leader of Starforce is none other than Jude Law's still-unnamed Kree officer.

In the film, Captain Marvel returns to Earth when Ben Mendelsohn's Skrull warrior Talos launches an invasion. [The 20 Weirdest Aliens in the Marvel Universe]

"This is not a superhero who’s perfect or otherworldly or has some godlike connection," explained Boden. "But what makes her special is just how human she is. She’s funny, but doesn’t always tell good jokes. And she can be headstrong and reckless and doesn’t always make the perfect decisions for herself. But at her core, she has so much heart and so much humanity - and all of its messiness."

"She can’t help but be herself," added Captain Marvel actor Brie Larson. "She can be aggressive, and she can have a temper, and she can be a little invasive and in your face. She’s also quick to jump to things, which makes her amazing in battle because she’s the first one out there and doesn’t always wait for orders. But the [not] waiting for orders is, to some, a character flaw."