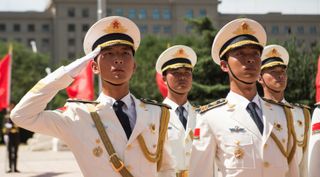 WASHINGTON — China is stepping up the militarization of space despite public statements to the contrary, the U.S. Defense Department contends in its most recent report on China's military capabilities .

DoD by law must submit a report annually on military and security developments involving the People's Republic of China. The 2018 edition was released on Aug. 17.

China's continued investments and efforts in space technology are a major concern for the Pentagon, the report says. Chinese strategists regard the ability to use space-based systems — and to deny them to adversaries — as "central to modern warfare." [The Most Dangerous Space Weapons Concepts Ever]

China is strengthening its military space capabilities despite its public stance against the militarization of space, DoD says. "Space operations are viewed as a key enabler of PLA campaigns aimed at countering third-party intervention." One of its goals is to develop a "real-time surveillance, reconnaissance, and warning system and is increasing the number and capabilities of its space systems, including various communications and intelligence satellites and the Beidou navigation satellite system."

The report raises concerns about China's counterspace weapons, including kinetic-kill missiles, ground-based lasers and orbiting space robots. China also is expanding surveillance capabilities that can monitor objects across the globe and in space and "enable counterspace actions."

The Chinese military in 2015 set up a "Strategic Support Force" to centralize the management of space, cyber and electronic warfare missions.

Two launch failures within two weeks created significant delays in China's national space program, the report says. A Long March 3B partially failed due to faulty guidance, navigation, and control. A Long March 5 launch catastrophically failed due to a manufacturing defect. The LM-5 is to become China's new heavy-lift vehicle, launching up to 25,000 kg into low earth orbit and will play an important role in the assembly of the Chinese Space Station starting around 2018. China is expected to bring on-orbit assembly of its own space station in 2019.

Since DoD started producing this report in 2001, this is the first one where counterspace capabilities are mentioned in a more alarming tone. "In addition to the development of directed- energy weapons and satellite jammers, China is also developing direct-ascent and co-orbital kinetic kill capabilities and has probably made progress on the anti-satellite missile system it tested in July 2014." The Pentagon believes China is "probably testing dual-use technologies in space that could be applied to counterspace missions."

China has not publicly acknowledged the existence of any new programs since it confirmed it used an anti-satellite missile to destroy a weather satellite in 2007, but Chinese academics have offered some insight, the report says. "These scholars stress the necessity of destroying, damaging, and interfering with the enemy's reconnaissance . . . and communications satellites, suggesting that such systems, as well as navigation and early warning satellites, could be among the targets of attacks designed to blind and deafen the enemy."

China has solidified its position as the second-largest military spender in the world after the United States. In early 2017, China announced a 6.5 percent inflation-adjusted increase in its annual military budget to $154.3 billion, approximately 1.3 percent of gross domestic product. "This budget continues more than two decades of annual defense spending increases and sustains China's defense budget has doubled during the past decade," the report says.

Another development of interest to the Pentagon is China's work in quantum satellites. "Priorities include unconditional security of network data across long distances, ultimately creating a global quantum network of classical (i.e.non-quantum) data secured by quantum cryptographic keys," says the report. Other areas where China is concentrating significant R&D resources include nuclear fusion, hypersonic technology, and the deployment and "hardening" of an expanding constellation of multi-purpose satellites.

Although the Pentagon posted the report online on Friday, unlike previous years, it did not issue a news advisory t o alert media. On Monday, Pentagon spokesman Col. Rob Manning did not explain why the release of the report was not announced but insisted there was "no effort to bury it."