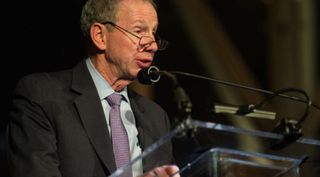 HUNTSVILLE, Ala. — The Pentagon admittedly is already five to 10 years behind in the development of an anti-missile system to thwart advanced hypersonic weapons that are now being tested by China and Russia.

The good news for the Defense Department is that the commercial space technology boom that is fueling the development of mega-constellations could help the military reach that goal. The Pentagon is studying options to build a space-based surveillance network to fill blind spots in the nation's current defenses — which were designed to counter ballistic missiles that fly on a predictable arch-shaped pattern.

To detect and track hypersonic weapons — which fly into space at supersonic speeds and then descend back down to Earth directly on top of targets — the answer is a large constellation of small satellites.

"Our response has to be a proliferated space sensor layer, possibly based off commercial space developments," said Undersecretary of Defense for Research and Engineering Michael Griffin. [The Most Dangerous Space Weapons Concepts Ever]

The hypersonic threat brings a "new urgency" that the United States has not seen since the Cold War and that demands a different type of thinking about the architecture, Griffin told reporters on Wednesday at the Space & Missile Defense Symposium. The only way to provide global coverage and not go bankrupt installing radars on the ground is to go to space.

Griffin cautioned that the traditional approach to developing "exquisite" military satellites is not going to work in this case. The Pentagon already has a sophisticated network of early warning satellites that detect missile launches. Another layer of sensors will be needed in the future for "persistent, timely global, low-latency surveillance to track and provide fire control for hypersonic threats."

Details such as how many satellites, in what orbits, at what altitudes have yet to be worked out. The Missile Defense Agency, which Griffin oversees, was designated the Pentagon's "executive agent" for hypersonic defense.

Griffin said the United States for decades has conducted its own hypersonic weapons development but chose to not weaponize the technology. "Our enemies have, so we have to respond," he said. "The first step in that response absolutely has to be a sensor layer from space."

There are no alternatives, "unless you plan to wallpaper the Earth with radars," he said. This is not a mission that can be done realistically from the ground or the oceans. "You would need a lot of radars that are very expensive and themselves become targets," Griffin said. "That's not an acceptable defensive posture. The only way to see these things coming is from space."

The military's early warning satellites in geosynchronous earth orbit cannot do this mission. "Hypersonic vehicles are hard to see from high orbit because they are not as bright. They're a factor of 10 or more dimmer than strategic missiles. So we have to get closer to see them and track them."

'This can be done'

The Pentagon during the Clinton administration conceived a plan for a 24-satellite LEO constellation to track missiles, but it never got off the ground. The Bush White House ordered two satellites from Northrop Grumman, known as the Space Tracking and Surveillance System. These were experimental satellites that were supposed to last only three or four years but are still in operation. Two satellites in LEO, however, cannot cover the globe.

"We know that this can be done," said Griffin. "To me this is not a technology challenge, this is a policy decision. Is the United States going to deploy a space layer so we can track the Chinese hypersonic threat from cloud break forward? The answer had better be yes."

Like any major defense procurement, the space sensor layer will have to be approved by the White House and get support from Congress. The 2019 National Defense Authorization Act adds $140 million to the Missile Defense Agency's budget for the development hypersonic defense capabilities.

In the absence of a capable hypersonic defense, the U.S. military in a future war would be vulnerable to China's long-range tactical hypersonic weapons. "The Chinese have been thoughtful in their missile development," said Griffin. "They have focused on tactical precision guided systems that could be really influential in a conventional fight," he said. "The Chinese would hold our forward-deployed assets at risk. And that's something to which we have to respond."

Sarah Reeves, vice president of missile defense programs at Lockheed Martin Space, said the company has invested $100 million in corporate R&D in technologies that would advance hypersonic defense. "We are working with traditional and nontraditional contractors," she said. "We're in discussions about ideal orbits and different solutions."

Kenneth Todorov, Northrop Grumman vice president of missile defense solutions, told SpaceNews that the company is looking to become a "dominant player" in the missile defense business. Northrop Grumman made a strategic decision last year to acquire space powerhouse Orbital ATK in anticipation of these increased requirements for space-based systems, said Todorov. "The future of missile defense, especially in acquisition, tracking and assessment of threats resides in space," said Todorov, who is a former deputy director of the Missile Defense Agency. "Ground systems are still relevant, but in the future the space layer is an imperative."

There was a lot of chatter at the SMD Symposium about the possibility that the Trump administration might want to deploy interceptor missiles in space to shoot down enemy weapons. Congress has asked the Missile Defense Agency to study it further.

Kinetic or laser weapons deployed on ships, drones or ground vehicles would be used to shoot down hypersonic vehicles. The United States would want to have an array of options to take down an incoming weapon in different phases of flight.