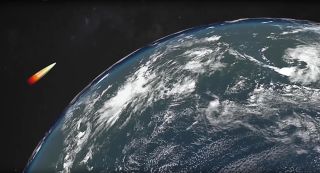 Here, an illustration of a flight of the warhead of a hypersonic boost-glide weapon.
(Image: © TASS\TASS via Getty Images)

China successfully tested a hypersonic aircraft on Friday (Aug. 3), one that could one day be capable of firing nuclear missiles around the planet at up to six times the speed of sound, according to China's state-run news site China Daily.

The aircraft, known as Starry Sky-2, is reportedly capable of screaming across the sky at speeds of up to 4,563 mph (7,344 km/h) and rapidly switching direction mid-flight, China Daily reported, potentially allowing the rocket to blast right past existing missile defense systems.

Video of the Starry Sky-2 test launch (which was conducted in an undisclosed location in northwestern China) showed the aircraft being launched into space on a multistage rocket. The aircraft then separated from its launcher and continued flying on its own power, soaring at about Mach-5.5 (five and a half times the speed of sound) for 400 seconds, China Daily reported. The aircraft then performed several maneuvers at an altitude of about 18 miles (29 km) before landing in a designated target zone — a demonstration that witnesses heralded as a "huge success," according to a statement quoted in the South China Morning Post.

Starry Sky-2, which is being developed by the China Academy of Aerospace Aerodynamics in Beijing, is an example of a "waverider" vehicle. As the name suggests, waveriders are sleek, arrow-shaped planes built to glide along the pressure waves created by their own supersonic lift — essentially allowing the aircraft to surf on shockwaves. Waveriders are thus able to maintain impressive hypersonic speeds (speeds of Mach 5 or above) while making rapid, midair changes in trajectory — making them particularly difficult for current missile defense systems to thwart.

While the technology is still likely years away from being ready for use in a combat setting, Chinese military expert Song Zhongping told China's Global Times that the successful test puts China "shoulder to shoulder" with the U.S. and Russia in the development of hypersonic striking systems.

Russian President Vladimir Putin announced in March that his country's military was hard at work on a hypersonic weapon code-named Avangard, which he claimed was capable of reaching speeds of Mach 20 and could be ready for deployment as soon as 2020.

The U.S., meanwhile, is also eagerly developing its own hypersonic weaponry, including a hypersonic missile capable of being launched from a warplane. The American defense company Lockheed Martin revealed in June that they had been granted a nearly $100 million contract to develop the missile for the U.S. Air Force.