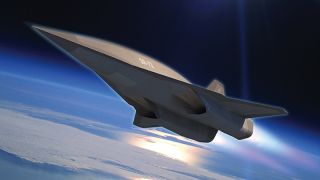 MOJAVE, California — The world is at the start of a renaissance in supersonic and hypersonic flight that will transform aviation, but the effort will need steady commitment and funding if the United States wants to lead the way, congressional leaders and industry officials said at a forum late last month.

"What's exciting about aerospace today is that we are in a point here where suddenly, things are happening all across the board in areas that just haven't been happening for quite a while," said former U.S. Air Force Maj. Gen. Curtis M. Bedke.

"There was a period where engine technology had just sort of stagnated — a point where all materials technology was going along at about the same pace," Bedke added. "There just wasn't much happening. But suddenly, in all sorts of areas that apply to aerospace, things are happening." [NASA's Vision of Future Air Travel (Images)]

Bedke was one of five panelists to speak Oct. 27 at the Forum on American Aeronautics here at the Mojave Air and Space Port. Sponsored by the House Committee on Science, Space, and Technology, the forum was hosted by committee chairman Lamar Smith, R-Texas, and member Steve Knight, R-Calif. Bedke, Smith and Knight were joined by David McBride, director of NASA's Armstrong Flight Research Center in California, and Craig Johnson, director of business strategy and development for Lockheed Martin's Skunk Works. Former Mojave Air and Space Port CEO Stu Witt moderated.

Knight has taken the lead on the House Science Committee in getting NASA's aeronautical program to focus on a new set of experimental aircraft. He said his passion for these programs isn't just about improving American aviation — it's personal.

"In 1967 was the last time we went hypersonic in an airplane," Knight said, referring to an X-15 flight piloted by his late father, William J. "Pete" Knight. That flight reached Mach 6.7 — 6.7 times the speed of sound — a record for piloted aircraft that still stands nearly 50 years later. (Hypersonic flight is generally defined as anything that reaches Mach 5 or greater. "Supersonic" refers to any flight that exceeds Mach 1.)

Since that time, the U.S. has conducted two unpiloted hypersonic research programs, X-51 and X-43. However, there was no continuity in the work, Knight said. [Going Hypersonic: Air Force's X-51A Waverider in Pictures]

"We collected an awful lot of data," he said. "But what I would like to see is that we can move that data into something, whether we are going to move into an aircraft that we're going to put people into or we're going to use it for some other program. We've got to have that continuity and move forward."

Knight noted that it still takes the same 4.5 hours or so to fly from New York to Los Angeles today as it did 30 years ago. Supersonic aircraft flights over land have been banned for decades because of the sonic booms they produce. No supersonic passenger planes have been in operation since the retirement of the Concorde in 2003.

NASA wants to change that. In February, the space agency awarded a contract to Lockheed Martin for the design of an experimental plane to test technologies that can significantly reduce the sonic booms caused by aircraft. If the program is successful, the ban on overland supersonic flights could be lifted.

"We're poised on the brink of a new era in air transportation," McBride said. "We do need to go faster. There is a market for supersonic flight over land in an efficient manner that can fly without being an annoyance to everyone on the ground."

NASA also is exploring ways to improve the efficiency and reduce the environmental impacts of subsonic aircraft. Engineers are experimenting with blended wings and other innovations.

Smith admitted that the difficulty that Congress and the president have experienced in passing budgets has caused problems in sustaining research.

"None of that is conducive to good work getting done in an efficient way," Smith said. "And we can do better. We need to get to the point where continuity actually lasts beyond just one administration, much less beyond tomorrow. And we're with you on that."

Bedke said there is no time to waste in moving these programs forward.

"It is inevitable that hypersonic technologies are going to happen," he said. "It is not inevitable that we are going to be the country to do it first. But we can be the country to do it first, but we're going to have to put our minds to it, and we're going to have to stop the history of fits and starts, of throwing money at a big program, achieving a wild success, and then having no follow-up. Or throwing a lot of money at too big a program, taking too giant a bite, failing miserably and then deciding hypersonics isn't going anywhere. Neither of those must be allowed to happen in the coming years."